How Do We Respond to a Coup? 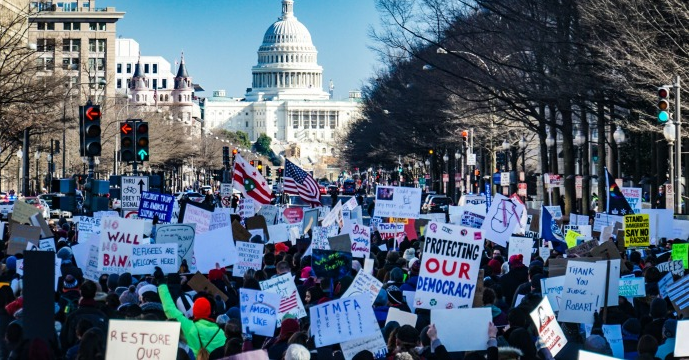 If Donald Trump follows through on his many threats to defy the results of November’s election, how is the U.S. religious left to respond?

Longtime activist, Quaker, and Democratic Left contributor George Lakey and DSA member Mark Engler, author of This is an Uprising, are among many who say the religious left has an important role in coup response, given our traditions and legacy of nonviolent resistance to autocratic behavior.

From Waging Nonviolence (full article here), Lakey writes, “We Need a Plan to Prevent a Trump Takeover — And This Anti-Coup Research Shows the Way”:

“A plan against a coup is better than insurance, as it can reduce the chance that we’ll face a coup attempt,” he writes. “The better prepared we are to counter it, the more likely that wiser heads in the Trump camp will realize that a coup is futile, and not attempt it.”

“The sooner the better, because case studies suggest that coups are weakest in their first hours and days. After all, the plotters know they are taking a big chance, and they have no guarantees of success. Trump’s success depends on others complying, but will they?”

Daniel Hunter of 350.org describes the outline of that resistance plan in in “Ten Things You Need to Know to Stop a Coup,” also in Waging Nonviolence (full article here ). The ten steps include a commitment to nonviolence, realizing that citizens can and do stop coups, and recognizing that a coup absolutely can happen here in the U.S.:

“We know it’s a coup if the government:

If any of those three principles are violated, we have to declare loudly and strongly: This is a coup.”

Lakey and Hunter are working with the organization, Choose Democracy, which has created a pledge we all can sign: