What Would the Buddha Do? Asking the Right Questions on Wesak 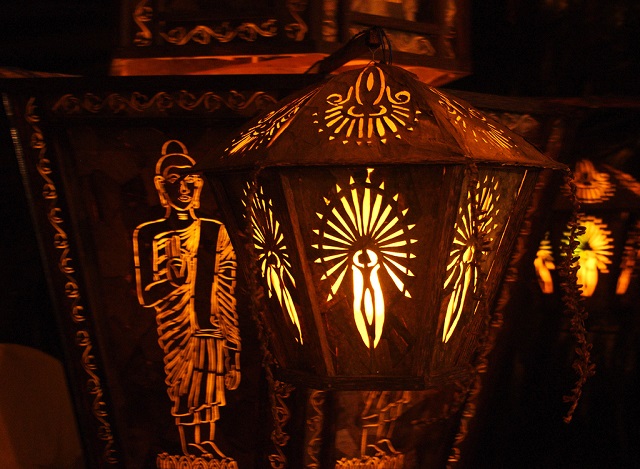 Wesak arrives with the hot weather in Florida.

For many people, the holiday commemorates the birth, enlightenment, and death of Gautama Buddha.  Like Easter in the Christian tradition, the Wesak holiday is a moveable feast, and different groups observe the holy day in different ways.  For some families, the day is known as Vesak or Buddha Day.  Wesak is usually observed in the month of May and it’s important for many Buddhists, some Hindus, and for some Unitarian Universalist congregations.

For Wesak, many homes are decorated with lights, and some Buddhists make a special effort to use clean energy.  Garden paths are often lined with solar lanterns.  Some Buddhists speak about the need to protect the natural world, while others emphasize the importance of economic and social justice, but engaged Buddhists agree that energy use is always an ethical concern.

The holiday reminds us that Siddhartha Gautama, a wealthy young man, found reality after he encountered a sick man, an old man, and a dead body being transported for cremation. After confronting reality the prince renounced his riches and privileges and he began his search for better way of living.   Others have followed in his footsteps.

Since recorded history, individuals have left protected places in order to explore. Some find compassion and enlightenment. Others turn away, unwilling to make the necessary sacrifices.

Many religious socialists have embraced the climate justice movement. In all of the religious traditions, socialists can ask the questions that need to be asked in discussions about climate change and energy policy:   How can suffering be reduced?    How can all of the nations transition to a clean energy economy while affirming human rights and dignity?

What would the Buddha do in today’s world?

He might spend time with the elders and disability rights advocates who understand the importance of energy production and use. Many depend on home medical equipment that requires electricity   Millions more struggle to obtain transportation and to pay for home heating and light.   Because of climate change, the need for air conditioning is increasing, but it's  a luxury for some Americans and it's rare in the developing nations.

A few years ago, I was in Washington, DC. for a national conference about energy use and climate change adaptation.    Much was said about carbon drawdown strategies, carbon taxes, and other proposals for saving Mother Earth.   At the end of the conference, some of the delegates gathered for a farewell dinner at Union Station. Cold winds slapped against the building, while, inside, homeless people walked back and forth, trying to stay warm. Unhoused people are among the poorest of the poor in the global energy economy. The poor seldom appear at energy policy discussions, but this was an unusual night, and for a few minutes, they were acknowledged.

"What happens to those people?" asked one of the environmentalists, as the police moved a cluster of old women toward the exit.   Some of the delegates gave a few dollars to the homeless people. It was an act of charity, given as an afterthought following two days of discussion. Critics would say that more is needed, and the critics are right.

The BBC News has reported (March 16, 2020) that the wealthiest ten percent of the world’s population consumes about twenty times more energy than the bottom ten percent.

What's needed is a Green New Deal that works for all of humanity, with special attention given to the people who suffer the most in today's energy economy.    The injustice in energy economics hurts much of humanity.  You can see the injustice in Union Station and you can see it in other places.     Habitat for Humanity estimates that forty percent of the world’s population lacks access to clean cooking facilities.   Solid biomass, coal, and kerosene are still used as primary cooking fuels in many regions.  The fumes are harmful to eyes and lungs.   Meanwhile, the wealthy demand more power, and their greed endangers the entire planet.

All people, in all places, need an adequate supply of energy that is safe, affordable. and sustainable.  Some people can survive with less energy use, while others need to consume more energy, and this is an   inconvenient truth in the climate change discussion that needs to be acknowledged more often.    Trying to care for eight billion people is a challenge.    Socialists will ask, "What’s the right thing to do in this situation?"

The month of May has several events that interest socialists.   "Hands Across the Sands” is a clean energy activity that started in Florida in the year 2010 as a protest against offshore drilling.    A few weeks later, the "Deepwater Horizon" drilling rig exploded and sank in the Gulf of Mexico.  What resulted was the largest marine oil spill in history.    In every year since then, thousands of Americans  have returned to the nation's  beaches and parks to take their stand  against fossil fuels. People of all faith traditions are invited.

As a religious socialist, I've helped to organize "Hands Across the Sands" events.   I support the transition of the United States to a clean energy economy, and, also, I ask for something more.    Global problems such as climate change require global solutions.  Because of the climate change problem, and because of the need to escape from poverty and disease, many families need to increase their energy use.

The poor may listen with interest as environmentalists preach about deforestation and the future of polar bears, and some will be sympathetic, but, at the end of the end of the day, many of the poor will ask for food and shelter.  The hills of Nepal and Haiti will be stripped for firewood.  If you want environmental peace, with a healthy future for all people, work for environmental justice.

Robert Francis Murphy is a Unitarian Universalist minister in Florida and a member of the DSA's Religious Socialism Working Group.  He assists with community health programs and emergency services in the U.S. South.   He is active in the Unitarian Universalists for a Just Economic Community.