While There is a Soul in Prison: Remembering Attica, Committing to Abolition 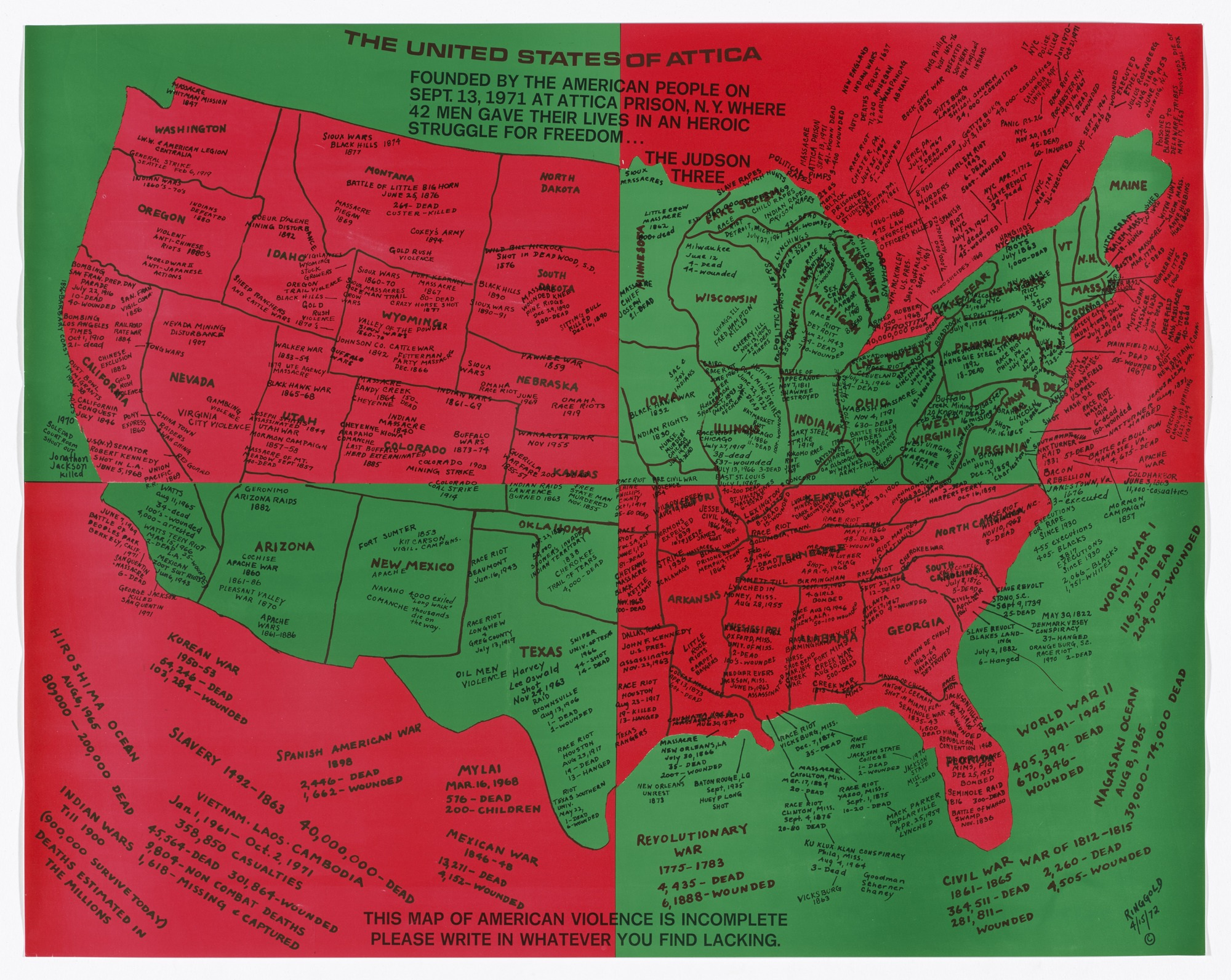 This September marked the 50th anniversary of the Attica Prison Rebellion, an uprising of incarcerated men at Attica Prison in upstate New York demanding basic human rights and living conditions. As the bloodiest and most deadly prison revolt in U.S. history, Attica is an early flashpoint in what has become the contemporary abolitionist movement, or the movement to abolish the prison-industrial complex (PIC).

As abolitionists and socialists, when we think back on Attica, we must remember the courage of its prisoners, the sanctity of their demands, and the terrible violence that was inflicted on them by state security forces when the prison was retaken. We must plot the destruction of death-dealing institutions like police and prisons. Beyond that, we must cultivate a future rich with what abolition scholar Ruth Wilson Gilmore describes as “life-affirming institutions” to replace them. These include strong neighborhoods, robust mental health services, well-paying jobs, access to education, and community practices based in restorative justice. In fact, the prisoners at Attica demanded these very things, all those years ago. Among their list of demands were the following:

Unfortunately, the conditions that led to the uprising have proven as timeless as the righteousness of the prisoners’ demands. Even now—fifty years later—incarcerated people, their loved ones, and their friends still decry the endless racism, ruthless censorship, and abysmal living conditions inside prisons. The system of cash bail—debtors’ prison by another name—will continue to menace working-class communities of color in all 50 states until 2023, when Illinois will become the first state in the union to abolish it in full. These conditions inhibit, rather than encourage, reflection and growth: those mental processes that are at the heart of rehabilitation, which society nominally believes in.

The COVID-19 pandemic has served as nature’s exposé on humanity. It has brought the ugliest aspects of our lives into a full spectrum of view. The prison-industrial complex has been no exception. The coronavirus has torn through prisons and jails. As of October 18, the COVID Prison Project reports that among the incarcerated population, there have been at least 431,240 COVID-19 cases and 2,620 deaths due to the virus nationwide.

Throughout this year of Attica’s semicentennial, activists have continued to demand state accountability for the public health crisis unfolding in yet another New York penal facility: Rikers Island. A report released in March uncovered the gross government malpractice that resulted in three COVID-related deaths in Rikers at the beginning of the pandemic (with another occurring recently on the same day that the person was granted compassionate release)  and recounted the innumerable failures of correctional authorities to contain the spread of coronavirus on the island since then. This led the ACLU of New York to demand a reduction of the jail population, vaccinations for all incarcerated people in the state, and the passage of the Less is More Act—a parole reform bill backed by DSA member and New York Assemblywoman Phara Souffrant Forrest that was signed into law in mid-September. However, even as the movement claims some victories, Rikers continues to operate, and therefore to kill: as of October 19, 14 people have died in custody this year in New York, with most of the deaths occurring at Rikers. In New York and throughout this country, the abolitionist struggle continues.

Where do religious socialists fit into that struggle?

Every religion teaches the power of redemption. In every faith, there are stories about human beings redeeming and being redeemed. Siddhartha Gautama renounces his status as a prince to live and die as an ascetic, and in doing so, escapes from the cycle of life and death entirely. The Abrahamic religions call on their adherents to answer for their misdeeds by doing virtuous acts and asking forgiveness from God. Universally, our faiths extol the importance of understanding that our actions in this life define us and carry us on over to the next, and that no person is ever beyond redemption for their vilest act.

We can take advantage of skills that we cultivate within our faith spaces—such as mindfulness, active listening and servant leadership—to build multi-faith, multi-tendency, and multi-generational coalitions for systemic change. Relationship-building is a foundational step in birthing a revolutionary culture, and abolitionist culture is no different. As religious socialists, we have the potential—and therefore the responsibility—to nourish the culture that connects us within and without prison walls.

One example of religiously informed abolitionist organizing is Abolition Apostles, a national jail and prison ministry based in New Orleans. Serving thousands of incarcerated people across the country, Abolition Apostles connects them with pen pals, material support, and advocacy for their parole and re-entry.

We cannot claim to live in a moral society until we have achieved the permanent abolition of the prison-industrial complex. The words echo in religious and socialist texts: Hebrews 13.3: Remember those who are in prison as though you were in prison with them; the Dhammapada: Whoever, being pure, forbears with punishment, bondage, and abuse, having the strength of endurance, having an army of strengths, that one I say is a brahmin;  Eugene Debs: While there is a lower class, I am in it, while there is a criminal element, I am of it, and while there is a soul in prison, I am not free.

Ty Kiatathikom is a writer and political organizer based in the Midwest. His work centers around Buddhism, abolition, and democratic socialism. He is a member of the Democratic Socialists of America and its Religion and Socialism Working Group.

For more information about the relationship of religious socialism to abolition, check out these videos of events sponsored by the DSA Religion and Socialism Working Group: “Faith, Abolition, and Socialism” discussion featuring DSA members Linda Sarsour and Rev. Andrew Wilkes and “Can Religion Help Us Imagine a World Without Policing and Prisons?” , a panel at this year’s Religion and Socialism National Conference.

The United States of Attica by Faith Ringgold is licensed under CC BY-SA 2.0