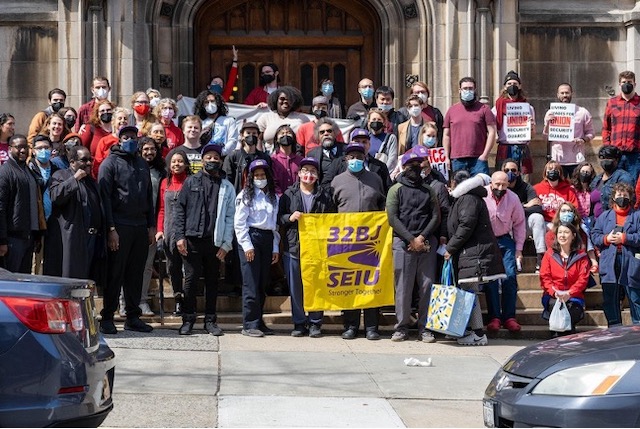 This Sunday will be May Day - The International Workers Day, celebrated and observed worldwide. Looking forward to May 1, we are proud to share this piece on labor organizing efforts and successes at Union Theological Seminary.

When security guards at Union Theological Seminary in New York City received a raise of $1.50 (up to $17 from $15.50) an hour in January 2022, they were shocked. Many had worked at the seminary for years; almost all had been there through the pandemic. Wages had been stagnant for three years prior, and seeing such a meager increase after all they’d been through was a jolt. They started to wonder how to make a real change.

Union Theological Seminary is home to many leading voices of progressive religious thought, from Christian dissident Cornel West and democratic socialist Gary Dorrien to professors at the Thich Nhat Hanh Center for Engaged Buddhism.  James H. Cone, recognized as a founder of Black liberation theology, came to Union in 1970, and taught until his passing in 2018. An institution rich in traditions of social justice should, in theory, have an easy time hearing the call for stronger compensation.

As is often the case with religious institutions, the call needed to be loud and then louder. Almost every guard out of twenty on site signed a union card with 32BJ, an SEIU local for property workers on much of the East Coast. Students mounted a campus-wide effort to garner signatures from caucuses (as campus organizations are called at Union) and individuals. In response, and in better faith than many other institutions, the seminary administration  guaranteed non-retaliation against guards involved in organizing.

These assurances, however, came as the administration claimed that it had no control over wage-setting and ceded that role to Allied, the third-party contractor. Messaging from the administration was consistently hopeful, positive, and respectful in general, but evasive as to who had the power to raise wages. Allied and 32BJ agreed that an initial proposal was a baseline, and Allied would agree to any wages that the seminary administration would pay for– as they had with the recent $1.50 raise. Those of us involved in organizing our fellow students and building a campus culture of solidarity were left with difficult questions: How do we help bargaining stay on course for a just contract when the boss denies being the boss? How do we keep the student movement informed without over-prioritizing that conversation as compared to the needs of the workers? And how do we, as students with religious, spiritual, and moral vocations handle conflict with administrators who are also community members– in Abrahamic vocabulary, our neighbors?

We began to answer these questions by creating something fairly unique among campus labor movements: a Theology and Narrative Committee. This committee drew lessons from the classic tactics and history of labor organizing, made creative use of social media, and engaged the whole campus community in ways that any worker-student solidarity movement can replicate, even if they’re not full up to the clerical collar with future ministers.

Union is home to a widely interbelief community, so one of the first things the committee did was get people thinking about their home tradition’s perspectives on economic and labor justice. People wrote up statements and talked with friends about why their scriptures and beliefs value substantive equality. A couple of things stand out from this experience: first, that it was very broadly accessible, regardless of background. People had stories, sacred texts, themes of practice, and other elements of religious life that spoke to the fact that everyone should have what they need to live, not be exploited, and other key aspirations of organized labor. The other was the sense of ownership that this helped people develop: it gave them a way in, and even people who doubted their “organizing” skills knew that they understood their beliefs, which led to new people stepping into leadership roles. The two students primarily responsible for organizing one of our biggest and most crucial actions, a chapel service described further below, had no previous organizing background but engaged their knowledge of worship and ritual to create a successful public action which led to further recruitment.

The next step we took was to record videos of workers and students delivering a range of theological messages. Some of these were the same explanations of why labor and economic justice matter in their traditions, others read directly from sacred texts, others gave prayers and recitations. Some videos were straightforward personal testimony, because lived experience is the root of  theology. Those videos were posted to the coalition’s instagram page and widely shared across social media. This helped inform community members who aren’t on campus as much (Union, like many institutions, remains in a hybrid in-person/online status due to the pandemic), as well as to generate more conversation, reflection, and personal investment in a just outcome among the broader community.

In one of the most vital steps of the campaign, workers and students collaborated to put on an interbelief chapel service. One security guard who serves as a deacon in his own church gave a reading from scripture. Another guard who practices Islam recited from the Qur’An. Others spoke about their lives and what healthcare, benefits, and a living wage would mean to them, especially after the hardship of the still-present global crisis. Songs of the labor movement were sung, some secular, some shaped by spiritual traditions. At the end of the service, students and faculty signed a huge poster on a central table with affirmations of the guards’ inalienable place in the community and right to a living.

During other moments of the campaign, including before meetings with the administration as well as the start of organizing meetings, coalition members offered prayers and meditations. These ranged from grounding ourselves in clarity of mind so as to plan effectively to invoking a spirit of divine justice so that when things reached an impasse, we would be able to make a way out of no way, as the saying goes.

And a way was made. On April 1, the same day that the Amazon Labor Union soared to victory on Staten Island, the guards agreed to their first union contract and declared it a win. A win it was: $23 an hour and full family no-cost-to-the-worker healthcare, just to name a few things. After months of public pressure, and on the brink of a publicized rally, the administration agreed to pay for a more just contract. The mood on campus was jubilant; members from all parts of the community hugged, high-fived, and congratulated each other. The following Monday, a celebratory rally at the school’s front steps on Broadway brought together workers, students, faculty, and other New Yorkers filled with the spirit of solidarity. On that bright spring day at the beginning of  Ramadan, the Surah al-Fatihah rang out in the voice of workers and students in unison.

Ben Heaney is a DSA member and Interreligious Engagement student at Union Theological Seminary. Originally from the Chicago area, he first became politically active in Minnesota, where he studied Philosophy and Comparative Religion at Hamline University.

This article represents only the author’s point of view. It is not a statement from, or endorsed by, the Living Wage Coalition or student organizers more broadly.