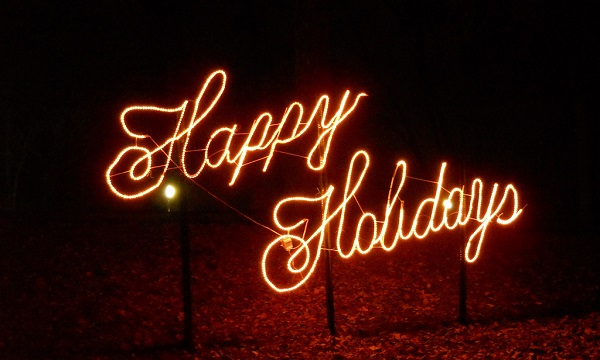 When people wish me “Happy Holidays,” I thank them. After all, they have just extended me some goodwill. To bark at a kindly meant greeting is … well, un-Christian. The so-called War on Christmas we hear so much about is a fake. Non-sectarian winter greetings pose no threat to the joyful celebration of the Incarnation. But there is indeed a Real War on Christmas. It has nothing to do with the design of seasonal Starbucks cups.

I encountered the Real War on Christmas recently, as I was talking with a woman who is an organizer with people living in poverty. She was trying to keep the wolf from the door of a family that had been beaten down by a list of woes, including incarceration and addiction. My friend was losing in her battle to talk the mother out of getting a payday loan to give the kids a “good Christmas.” It would, of course, also put the family deeper in the hole, and the mother understood this. Yet it would break her heart to deprive her children of new toy electronics – even if that means that the actual electricity may be shut off before the New Year. The commercial pressure to give, give, give is something that the most fortunate can sustain. But if it is impossible to have a “good Christmas” without presents under the tree, where does that leave people in poverty?

The Real War on Christmas began when we made the holiday The High Feast of Capitalism. We went from variations of Santa Claus putting oranges in stockings to people shoving each other to get to the “door-buster special” flat screen. Something is badly out of proportion.

We have sentimentalized spending on gifts that we cannot afford. O. Henry’s “Gift of the Magi,” published in 1905 and served up as a sugary Christmas offering ever since, exemplifies the give-until-it-hurts Christmas ethic. A young and poor couple wants to give each other lavish Christmas gifts. She sells her beautiful, long hair to a wigmaker so that she can buy him a gold chain for his cherished pocket watch. He sells his watch to buy her expensive combs to dress her hair.

The story is generally interpreted as a tribute to true love and its accompanying willingness to sacrifice for the beloved. I’ve always thought that the couple got suckered. Proof of love never comes wrapped with a ribbon.

Except for his own body, Jesus never gives a material gift to anyone. The Gospels recount gifts of forgiveness, acceptance, and healing. We should think of ways to give those far more valuable presents this Christmas.

One of the lovely things about Jesus was that he did not restrict his gifts to any one community. He was kindly disposed toward Samaritans and Romans, though neither were friends of the Jewish people. I doubt that he would get behind anything that made someone from another culture feel excluded, such as a manger in a city park or a Christmas pageant in a public school. This gets to the heart of the Fake War on Christmas. It is merely an insistence that everyone adopt Christian beliefs – or at least participate in Christian rituals without protest. When pundits bellow about The War on Christmas, they are really complaining that they do not enjoy absolute cultural hegemony. I say “cultural” rather than “religious,” because I do not believe it has much to do with religious belief.

I do not need a manger on my town’s green. I’ve got several in my own house. Putting religious symbols in public spaces is only a way to mark territory, a bestial activity.

Never has the hunger for cultural hegemony threatened to do as much harm as it does at this moment. For the incoming administration, bigotry is not a failing – it is a central commitment.  For those of us about to celebrate the birth of Jesus, it is time to wear our Christianity on our sleeves. There are many ways to do this. We can resolve to register as Muslims if president-elect Donald Trump goes forward with his promised plan. We can unite with people of all faiths to create sanctuary spaces for people at risk of deportation. We can work at every level of government to elect people who will continue to struggle for justice and equality.

We Christians can wish each other Merry Christmas, because it is a source of strength and joy to realize that God chose to live in solidarity with humanity. We need all the strength and joy we can get.

When we encounter sisters and brothers who do not share our beliefs, we can wish them Happy Holidays. This recognizes that we do not hold all the answers, that people of every faith and people of no faith at all enrich our lives. Perhaps most important, we wish them well on their own terms. That is an act of love and acceptance. In other words, it is what Jesus would do.