"The Church is Christ Living in the World": The Vatican Pavilion at the 1964/65 World's Fair 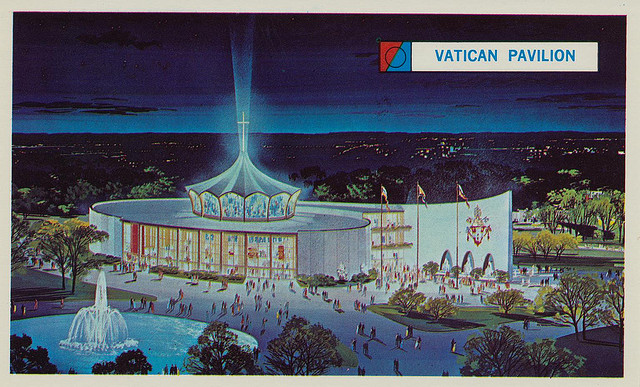 “The Church is Christ Living in the World”:

Last summer I attended the World’s Fair Anniversary Festival in Queens’s Corona Park, which celebrated the 50th and 75th anniversaries of the two 20th century New York Fairs (the first held in 1939, the second in 1964/65). It was a small event, and the line for the tiny memorabilia tent was much shorter than the line for the Belgian waffles. Queens Museum had a better assortment of Fair trinkets, and it was at the museum gift shop that I purchased my own little piece of New York history—a plastic replica of Michelangelo’s Pieta, the authentic version of which was on display at the 1964/65 Vatican Pavilion. As I daily pass by the cabinet that contains the little plastic Pieta in my apartment, I am reminded that this year is the fiftieth anniversary of the start of the 1965 session of the Fair.

In describing the 1939 World’s Fair, Bhaskar Sunkara writes, “Capital used to sell us visions of tomorrow.” The 1964/65 New York World’s Fair was no different, but capital—represented by American corporations like General Motors, I.B.M., and Ford—was not the only imagineer at the Fair enacting a vision of the future. One of the most popular exhibitions at the Fair was in fact the Vatican Pavilion, a modernist jewel-box designed by the architectural firms of York & Sawyer, Hurley & Hughes, and Luders and Associates. The groundbreaking ceremony in 1961 was a media event covered by television and broadcast by Vatican Radio, in which Pope John XXIII pushed a button in his Vatican apartment to signal the start of pile-driving operations at the construction site in New York.

The Pavilion’s forward-looking optimism and embrace of the modern world plants it firmly in the era of the Second Vatican Council and the pontificates of John XXIII and Paul VI, who visited the Pavilion himself in 1965. The Second Vatican Council (1962-1965) marked a period of openness to the modern world in the 20th century Catholic Church—as John XXIII often quipped, “It was time to open the windows of the Church to let in some fresh air.” Thus it is interesting to reflect on the Vatican Pavilion as a New York footnote in the Church’s history during the anniversary years of not only the New York World’s Fairs, but also the sessions of the Vatican Council—and the potentially momentous events of Pope Francis’s current pontificate.

With its mixture of traditional Catholic masterpieces—the aforementioned Pieta, a 3rd century Greco-Roman statue of Christ as the Good Shepherd—and World of Tomorrow-esque touches, such as LIFE Magazine transparencies of the Sistine Chapel ceiling, a life-sized simulacra of the Apostle Peter’s tomb under St. Peter’s Basilica, and a 350-seat modernist chapel offering occasional Masses, the future-past vision of the Pavilion offered visitors a Disneyland-like encapsulation of the promise of Vatican II. As the Council document Gaudium et Spes famously declares, “The joys and the hopes, the griefs and the anxieties of the men [sic.] of this age, especially those who are poor or in any way afflicted, these are the joys and hopes, the griefs and anxieties of the followers of Christ. Indeed, nothing genuinely human fails to raise an echo in their hearts.”

The Vatican Pavilion, erected in the midst of a futuristic showcase of American prosperity and progress, placed the still-powerful artifacts of the Church’s past alongside the Ford Mustang, picture-phones, translating computers, and GE’s “All-Electric City.” The Pavilion was an echo of the joys and hopes, the griefs and anxieties of the modern world, raised in the heart of the Church. As a response to the contemporary condition of humanity, the Vatican Pavilion offered the wisdom of the past for the possibilities of building the future—represented best by the moving platforms that brought viewers face-to-face with a glimpse of the historic Pieta against a striking background of blue light, surmounted by a glittering electronic halo. The theme of the Pavilion stated it boldly: “The Church is Christ Living in the World.”

Despite all the emphasis on progress, Gaudium et Spes gave a preferential option to “those who are poor or in any way afflicted.” The World’s Fair peddled fantastic visions of the future, but these were the shiny visions of American corporations and the smiling faces of powerful nation-states. My reflections on the 1964/65 World’s Fair come after time spent studying the lives and witnesses of the Berrigan brothers, two Catholic priests, who were members of the Catonsville Nine. The 1968 action at Catonsville, in which Dan and Phil Berrigan and seven other nonviolent protestors removed draft cards from a Maryland draft board before burning them in the parking lot with homemade napalm, was, among other things, a decisive “no” to the United States’s endless war in Vietnam, racism, poverty, and an American Catholic Church that would often underwrite these things as a handmaiden to American imperialism rather than as a sign of contradiction within it.

The ultra-American Cardinal Spellman, who exiled Dan Berrigan to Latin America for his involvement with the peace movement in 1965, had a central role to play in the 1964/65 Pavilion. In fact, his private collection of coins and stamps “with religious significance” was on display in a kiosk at the exhibit. The Vatican Pavilion was not immune from the naive, nationalistic and know-nothing optimism of the World’s Fair; its vision of modernist-traditionalism, like the retro-futuristic displays of the American corporations at the Fair, supported a facade of American ambition that already showed signs of wear-and-tear, not to mention a dark side of horrific violence and oppression. In other words, Catonsville’s cynicism toward the path the United States and the American Catholic Church were taking went in a decidedly different direction from the Vatican Pavilion’s optimism about the prosperity and joy that awaited American Catholics, if only they would embrace the wisdom of the past while looking toward a peaceable future.

The Vatican Pavilion’s context in the era of the Second Vatican Council, its glimpse of a Church that stood firmly in the modern world while not forgetting the wisdom of a centuries-old faith, and its embrace of the future and its utopian possibilities, makes it an appealing vision of the future-past Catholic Church that could have been. The 1964/65 World’s Fair saw America on the cusp of endless war, spiraling racial and class violence, and cultural changes that would herald an end to the “future of limitless promise” described by the narrator of GM’s Futurama exhibit. For many Americans (and Vietnamese), such a future had never existed, and was always a mirage dangled about by the imagineers of American capital and American technocracy. Likewise, the promise of the Vatican II era would give way to ecclesiastical re-entrenchment in the past and its structures of authority, to enforced theological stagnation, and crises of morality and judgment. According to the witness of the Berrigans and others, the forward-looking Church—at least in its hierarchical capacity—was something of an unfulfilled promise even in the 1960s.

Even so, the Fair’s theme of “Peace Through Understanding” offered a vision of tomorrow that saw humanity reaching the apex of its possibilities, an ultra-modernist glimpse of a world of moral and technological progress. The notion that the Catholic Church would have a significant role to play in such a future was already radical, an example—signified by the 3rd century statue of the Good Shepherd, the Christian Gospel inculturated in the trappings of Greco-Roman mythology—of a Church that retained its distinctive Good News while embracing in love, rather than retreating from, the contemporary world. Such a vision of tomorrow’s Catholic Church is worth remembering and fighting for, even if its theological retro-futurism must be retrieved in an atmosphere of faithful discernment. The Renaissance artistry of Michelangelo’s Pieta is a result of an embrace of the world and its beauty, but it is also a masterful witness of the sorrow that this world brings upon the poor and the powerless. The moving platform to the Pieta should bring us to the sorrows of the modern world, in addition to its joys and its innovations. 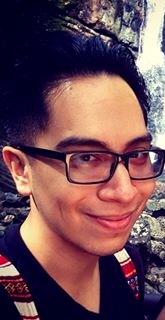 Nicholas Laccetti is a Master of Divinity student at Union Theological Seminary. He holds an MA in Medieval Studies from Fordham University, where he concentrated in patristic and medieval theology. He is interested in theological aesthetics, popular religion, and Catholic approaches to social change.