Breaking Our Idols: Lessons from Abraham 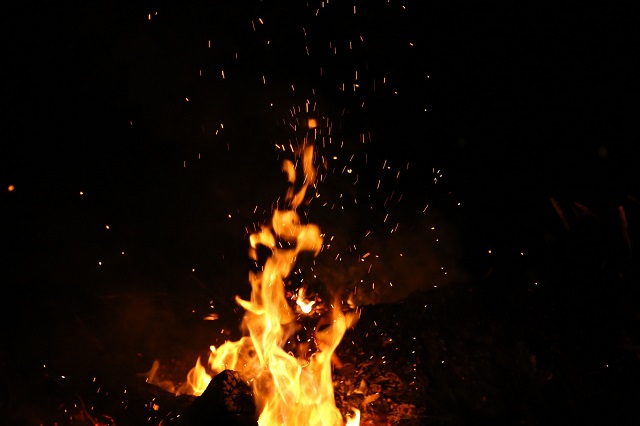 “(Abraham said) ’And [I swear] by Allah, I will surely plan against your idols after you have turned and gone away.’ So he made them into fragments, except a large one among them, that they might return to it [and question].” (Quran Al-Anbya, 21:57-58)

A fire is burning across the United States, and indeed, across the globe.

Decades, if not centuries, of unbearable injustice gathered like dry tinder in a drought-stricken field. Anxiety building in the wake of a global pandemic and crisis of unemployment, exacerbated by increasingly fascistic leadership (and increasingly limp opposition to it), contributed to pent-up societal tension. Eventually, it took just one more spark to start the fire: the broad-daylight, state-sanctioned lynching of George Floyd. Once again, Black Americans are leading the fight for reform and revolutionary changes to the country, and the fire of a populace that has had enough is burning brightly throughout the nation.

Amid all of this, I was reminded of the story of Abraham (عليه السلام), who also encountered a great fire; dabbled in his fair share of property damage; and, like every prophet, fearlessly challenged the status quo. While our faith communities are rightfully spending time discussing principles of activism, fairness, equity, and justice entrenched in our traditions, I thought I would reflect on a more literal parallel.

The story, as described in Chapter 38 of the Genesis (Bereishit) Rabbah and primarily in Surah (Chapter) 21 of the Quran, albeit with slight differences, can essentially be summed up as such: Abraham (عليه السلام), to show his people the futility of the physical idols they worshipped, destroys all but one of them – the largest one. When his people are horrified to find their idols in pieces, Abraham (عليه السلام) challenges them to ask the largest idol what happened to the rest of them, exposing the fallacy of worshiping material objects that are unable to speak or defend themselves. He is then confronted by the king of the land, and continues to highlight the pitfalls of the authorities’ insistence that society continues to worship that which is in the physical realm rather than an unseen, omnipotent, monotheistic God. Enraged by Abraham’s challenges to the established system of power centered around the worship of idols, the king and his followers throw Abraham (عليه السلام) into a fire with the intention of burning him alive as punishment, but God intervenes and cools the flames for him, allowing him to emerge unscathed.

The uprisings of this pivotal moment in history have also helped shatter the paradigms of millions around the world. Not just by the careless admissions of all-too-comfortable supposedly-liberal politicians, but by fragmenting some of society’s idolized, systemic “false gods.”

“And say: Truth hath come and falsehood hath vanished away. Lo! Falsehood is ever bound to vanish.” (Quran, Al-Isra 17:81)

The largest and most obvious of these idols is the policing system. There may never have been a time in American (or even global) history where the core concepts of modern policing have come under such public scrutiny. Police reforms are gaining momentum and the seeds of reform are being planted in places including Minneapolis, the city where George Floyd was killed. The power of mass protest, amplified by social media, has forced people to reconsider the idea that police are the swiss-army-knife solution to all too many problems, and uncloaked yet again the chokehold they have on so many politicians.

Also destroyed was the idea that merely putting “Black faces in high places” was the solution to America’s animus towards its Black citizens. Putting aside the dynamics of the Democratic primary that lead Joe Biden –perhaps the quintessential “white moderate” of the race – to victory, electing a Black man to be the most powerful person on the planet was also a multi-faceted disappointment. While President Barack Obama made some minor strides in criminal justice reform, he, and other Black liberal lawmakers, failed to emerge as the solution to massive systemic issues exacerbating the conditions of Black Americans. To make matters worse, his ascendency as a “change candidate” and subsequent capitulation to neoliberal ideology may have reinforced to people of color across America that the way to be accepted and gain power in the system is to assimilate into the hegemonic discourse of the day. And that dominant, insidious discourse has been unveiled once more for all to see: the undying, ugly disease of white supremacy.

While COVID-19 is affecting the lungs of its victims, leaving them unable to breathe, it was arguably the social illness of white supremacy that choked George Floyd. And it is everywhere; both within us and outside of us, regardless of who we are in race, religion, gender or otherwise. White supremacy, the exploitation and dehumanization of marginalized groups, and capitalism are integral fibres of the same rope, and have been for centuries. This is the rope to which many people – from establishment power players to average Americans – have learned to cling. These protests have forced us to look down and see that the rope is fraying and burning our palms, and hurting people at home and abroad.

This chimera of white supremacy, exploitation and capitalism, however, is our largest idol. That is to say, although its shortcomings are repeatedly exposed, and the damage done by worshipping it is clear, it is largely untouched. And no matter how many corporations are looted in futile vengeance for the looting of corporate socialism, no matter how many times the giant, ugly, materialistic idol is left speechless and powerless to improve our conditions, our brothers and sisters in humanity, especially those in power, continue to turn back to it for comfort, familiarity, and worst of all, answers. Rather than seek answers from it, however, we as people should continue to question it – without fear of being cast into the fire.

“Allah said, ‘O fire, be coolness and safety upon Abraham.’ And they intended for him harm, but We made them the greatest losers.” (Quran, Al-Anbya 21:70)

Indeed, if we intend to do the right thing, keep reflecting, and keep taking actions and working for justice, then perhaps, God willing, we will have done our jobs. These are not idols we can break alone, and they will not shatter overnight, but in our steadfastness and solidarity, perhaps we will be lucky enough to be blessed as Abraham (عليه السلام) was: with clear vision for the truth, and coolness amidst the flames.

Imaan Javeed is a medical student at the University of Toronto interested in the intersections of science, spirituality, politics, and health. He welcomes you to follow Islam in Public for more reflections on Islam and social justice, as well as check out Yaqeen Institute for detailed writing on that subject and many others.

Photo by Miriam Espacio from Pexels