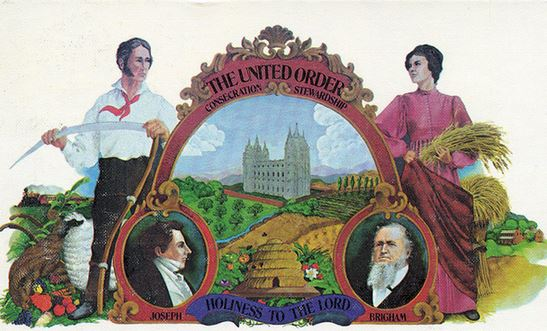 Making a connection between U.S. Mormonism as it presently exists and socialism is a serious stretch. Most members of the Church of Jesus Christ of Latter-day Saints in the U.S. strongly identify with conservative causes and the Republican party. Church leaders long regularly condemned socialism. The church is organized around an all-male priesthood, with homosexual behavior and gender fluidity officially denounced, and for most of the 20th-century that priesthood was explicitly forbidden to Black Mormons as well. Although policy changes have moderated the church in recent decades, no one can look at, for example, former Republican presidential candidate Senator Mitt Romney, and conclude that his community will embrace socialism any time soon.

Still, times can change. Certainly they have since the Mormonism which existed 150 years ago, which church mostly rejected capitalist development and preached Christian communalism instead, emphasizing “the United Order” or “the Order of Zion.” In practice, this meant engaging in experiments, varying from one community or congregation to the next, with collective ownership of property, unified decision-making in economic matters, and systems of stewardship and welfare. The goal, in words revealed to founder Joseph Smith, was that all in Zion would be “of one heart and one mind,” and there would be “no poor among them.”

None of these experiments long endured the Americanization of Mormon society which followed after Utah’s admission to the United States. By the 1910s and 1920s, though socialist organizers saw much local success, almost no connection was made between their party-building efforts and the communal orders which many Mormons had committed to only a few decades earlier.

Hugh Nibley, a long-time and famously contrarian professor of religion at the Mormon church’s flagship university, Brigham Young University, passed away in 2005. He never identified as a socialist, nor reconciled his church’s communalist history with its leadership’s subsequent denunciations of radical politics. But what he did do was interpret the scriptural and doctrinal teachings which motivated those early experiments, and used them to condemn the exploitative and environmentally destructive capitalist practices of most of the 20th-century Mormon church’s U.S. membership. His relentless criticism made Nibley popular with Utah’s small Mormon Democrat population--but aligning Nibley’s project with a possible Mormon contribution to Christian socialism is an unfinished project.

Last year, a group of young(er) Mormon scholars took up Nibley’s attacks on the U.S. capitalist ethos (many of which were collected in 1989 book titled Approaching Zion) in a small volume titled Reapproaching Zion. [Full disclosure: I am one of the contributors.] These writers are not necessarily sympathetic to socialism (some, in fact, are clearly opposed to it), but through their engagements, an outline of what a Mormon Christian socialism might involve can nonetheless be discerned.

While the authors examine Nibley’s ideas from distinct legal, economic, and philosophical perspectives, themes of pluralism, community, and limits are perhaps most important. By basing his condemnations of profiteering, careerism, and inequality on the various ways that early Mormon settlements constructed their distinct Zions--sometimes involving something as simple as storehouses of food which any member of the community had free access to, but sometimes involving collectivized working and living arrangements--Nibley’s writings underscore the perils involved in assuming any singular response to all economic evils. Building alternatives that truly empower people in their communities, but do not make those communities into exclusive localist tyrannies, is a tension-filled exercise.

Some of the authors speculate on the kind of arrangements that might enable diverse, yet still egalitarian, economic practices to extend beyond a single family, church congregation, or business, and how much localism, self-sufficiency, or even isolation might be necessary in order to preserve those arrangements. Others, grasping the hard nettle entailed by those possibilities, argue that Nibley showed how any committed Zion community--and, by extension, perhaps any committed socialist society--would have to accept a level of wealth that is lower that which profit-driven financial speculation and individual competition often generates. This idea is hardly new to anyone familiar with the intentional communities which Christian radicals have built over the centuries: a commitment to non-exploitative labor often means a commitment to work that is embedded in an equally shared common life, and such work is mostly incompatible with being outsourced, expanded, or specialized. Within Mormon circles, which has no tradition of monasticism or vows of poverty, the idea that economic limits are connected to the religious command to build a Zion community where there is no poor is a rare argument indeed.

Nibley himself notoriously lived out this rare ideal (Mormons tell the story of church president Gordon B. Hinckley speaking at Nibley’s funeral, and him observing that there wasn’t a single car in the church’s parking lot that day that wasn’t fancier than the 1976 Datsun Nibley drove for the last 30 years of his life). This gives rise to the accusation that Nibley idolized poverty, which some see as contrary to elements of both Mormon history and theology. Such claims introduce a connection to a longstanding socialist debate. For some, the promise of socialism is a more democratized distribution of the goods of wealth. But for others--and here the Christian socialist tradition speaks loudly--the socialist ideal is appealing exactly because it puts limits upon what the economist Joseph Schumpeter (borrowing from Marx) called the “creative destruction” of capitalist wealth-creation itself. In this sense, Zion--or any kind of Christian socialist community--is worth building in that it prioritizes social goods over distributable ones, meaning there will be more of the former and less of the latter. In attacking Nibley’s description of the Zion communities which Mormons ought to build as primarily small, agrarian, and static, and thus comparatively poor, some of his critics are misunderstanding exactly their point.

Religious socialism is by its nature an aggregation of insights, drawn from every tradition which recognizes that the integrity of individuals depend upon constructing communities which grant them equal economic and democratic power. Mormonism’s history has many such insights, though learning from them involves digging past close to 150 years of official disregard.

Hugh Nibley’s own intellectual excavations were in the name of a Zion ideal, which many might see--because of its religious foundation, sense of limits, and pluralist structure--as opposed to their preferred socialist one. I find this unfortunate. As Charles Marsh wrote regarding Christian influence on the civil rights movement, the drive to build “beloved communities” takes place “in, through, and outside the church.” To whatever extent scholarly reflections upon one Mormon troublemaker’s attempt to describe and urge upon his fellow Mormons a mostly lost communalist ideal can become part of such a collective building project, it is worth exploring--even if the church tradition out of which these reflections emerge may seem a most unlikely source.

Russell Arben Fox is a professor of political science at Friends University, a small Christian liberal arts college in Wichita, KS. He is the communication coordinator for the Wichita chapter of Democratic Socialists of America.