"Fighting for Each Other" 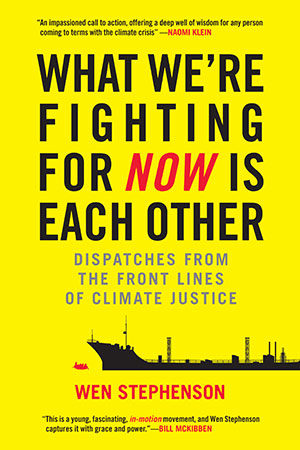 A Review of Wen Stephenson’s What We’re Fighting for Now Is Each Other: Dispatches from the Front Lines of Climate Justice (Beacon Press, October 2015)

The temperature of the planet earth continues to rise. Floods, winds, and fires increase in intensity. Arctic ice and mountain glaciers melt. Rising seas threaten to submerge low-lying coastal cities, islands, and heavily populated low-lying agricultural basins. But these are only harbingers of worse things to come.

Pope Francis [Laudatio Si] and Naomi Klein [This Changes Everything] agree with the vast majority of scientists that catastrophic climate change is already happening. Unless drastic reductions in global carbon emissions begin to take effect immediately, accelerating global warming will melt polar ice, raise sea levels, drive many plant and animal species into extinction, threaten food production, and drastically threaten the very survival of the most vulnerable people of the earth.

Although major climate disruptions can no longer be averted, the worst effects can still be mitigated by an unprecedented global commitment of governmental authorities to replace the burning of fossil fuels with renewable energy systems in the shortest possible time. Such global cooperation is rendered extremely difficult by the entrenched power of the giant fossil fuel industries that exert enormous influence over global economic and political systems. Only a massive and coordinated upsurge from below and a radical shift in social values can overcome that resistance rapidly enough to stave off the worst consequences of catastrophic climate disruption.

Wen Stephenson’s impassioned book What We’re Fighting for Now Is Each Other, just released by Beacon Press [6th October 2015], draws out the implications of the climate crisis for what we do now in response to it. He describes his own personal awakening to this urgent threat to humanity, which encompasses his own upbringing as an evangelical Protestant in East Texas; the impact of reading the Zen poetry of Gary Snyder; and above all his deep meditation upon the life and work of Henry David Thoreau. He interprets Thoreau not so much as an environmentalist living in the woods near Walden Pond, but as one who emerged from his  walking the woods as a radical abolitionist who committed himself to the fight against slavery.

The bulk of Stephenson’s valuable book is based upon extensive interviews he conducted with some 70 climate activists from the fall of 2012 to the fall of 2014. He not only describes their committed activities, including nonviolent civil disobedience, but also delves deeply into the moral and spiritual beliefs of those he interviewed. A few of these are well known [Naomi Klein, Bill McKibben], while others deserve more recognition for their courageous struggles.

These include Tim DeChristopher, who spent nearly two years in federal prison for disrupting an illegal auction of federal public lands in Utah; Ken Ward and Jay O’Hara, who blocked a freighter carrying coal to a power plant in Somerset, Massachusetts; and many more young people and students who engaged in civil disobedience to block the construction of pipelines in Massachusetts and Texas. Stephenson also interviews several Hispanic and African-American activists who are fighting to protect local neighborhoods and communities against the health hazards and pollution caused by the oil industry in East Texas.

Stephenson and many of those he interviewed talk about overcoming their paralyzing feelings of sadness and despair at the sheer magnitude of what needs to be done. Comparing the climate justice movement to the movement against nuclear weapons and testing, he notes a crucial difference: In the case of global climate disruption, the “missiles have already left the silo.” The catastrophe is already unfolding, and even our most successful efforts can only reduce the scope of the disaster.

He finds hope in recalling that the movement to abolish slavery felt hopeless in 1857; racial segregation in the American South seemed deeply entrenched in 1955; the Apartheid regime seemed impermeable to resistance in South Africa. Yet these social and political struggles were able to win decisive victories, even if ultimate success for their goals proved to be elusive.

Now today, even if only a radically transformative movement for climate justice comparable with these previous movements can avert an apocalyptic future for humanity, there remains the possibility of individual and collective moral and spiritual awakening prefigured in the climate justice movement. The essential moral and spiritual values needed to overcome despair and to fully engage in this struggle are the ones common to all humanist and religious traditions: faith, hope, and love. Namely, faithful to the people and to the world we love, hopeful that we can prevail over the obstruction of entrenched power, and [he cites Martin Luther King’s Riverside Church speech] love as the supreme unifying principle of life and now essential to the survival of humanity and the possibility of social justice on earth.

Wen Stephenson challenges us to wake up and to act together with passionate love for each other. It may be all we have left. Maybe it is enough.

Buy and read the book. If at $24.95 it seems a bit expensive, all of the author’s proceeds will go to climate justice organizing. Tim DeChristopher will join Stephenson for his book talk at Union Theological Seminary on 10th November at 7:00 p.m.

Paul Garver lives in Acton, Massachusetts (almost as close to Walden Pond as Wen Stephenson) and regularly swims and walks there in company with the spirit of Henry David Thoreau. Like Stephenson, he and his wife Willy are members of the Open Meadow Zen sangha in Lexington, Massachusetts. Paul is a retired local and global labor activist, very active in political life and specifically in DSA. He agrees with Stephenson that only morally and spiritually grounded mass social movements are capable of transforming human society deeply enough to preserve the possibility of climate and social justice for future generations.