From Violence to Violence 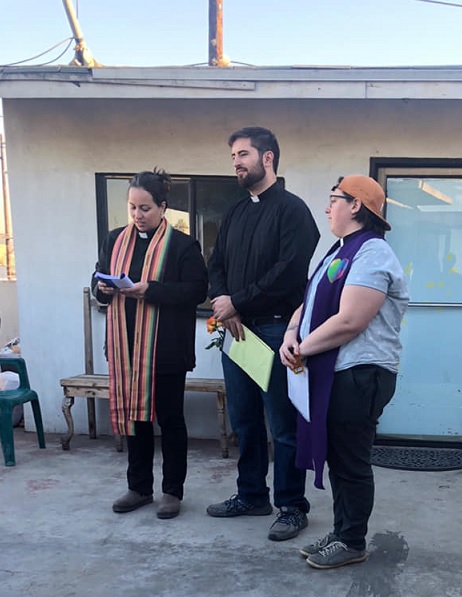 Accompanying Asylum Seekers at the US Border

(Cross-posted from The Flood.)

The corridor was very long. I had learned that these corridors, where those traveling by foot line up to reach the U.S. border, are very long in Tijuana. Some, like the one at Otay Mesa, are straight and narrow, while others wind in circles, climbing higher and higher to cut across an invisible and yet very real line, before descending into a large and fluorescently lit room.

I had never been nervous crossing the U.S./Mexico border. Perhaps I had been curious in the past, curious to see how the matter-of-fact border agents would treat me, curious to stand in front of an official who felt a serious duty to protect a nation-state. But this time I was nervous.

I tried to calm my fears and slow my breathing. I attempted to project hope and a steady presence for the boys who were walking next to me. I couldn’t begin to comprehend the courage demonstrated by these boys, ages 15 to 17, who had recently traveled thousands of miles, on their own, to seek the safety and comfort of a country that despised them. I couldn’t fathom their resilience, so I attempted to reflect back what they had shown me; I offered smiles, prayer and calm companionship.

As we reached the end of the corridor, where that invisible and obtrusive line lie in wait, over a dozen militarized US Customs and Border patrol agents got in formation. “I am afraid for my life and I want to seek asylum,” said one of the boys, the group-appointed leader. As the boys began to state their claims for life, the officers pushed them backward, across that invisible line, and told them that they could not seek asylum at Otay Mesa.

“Get on the list,” shouted the guards, who held tightly to their assault weapons and scrunched their angry faces beneath their helmets.

The “list” is a handwritten account of the names of those who have traveled to Tijuana and wish to seek asylum in the U.S. The list is maintained in a dilapidated notebook, managed by a group of asylum seekers. The list is an illegal and immoral system, wielded by U.S. and Mexican authorities to keep migrants from expressing their legal and human right to present themselves at any time, at any place, and ask for asylum. The list contains over 5,000 names and unaccompanied minors are not allowed to add theirs. When names on the list are announced at the San Ysidro port of entry, typically after a six week wait, migrants must be present to make the trek across the imaginary line.

For those who get on the list, the six week wait can be dangerous and unfeasible. Highly vulnerable populations, like unaccompanied minors, pregnant women and the LGBTQ community simply cannot afford to wait. Migrants who attempt to circumnavigate the list are met with barbed wire and chemical weapons.

It was for all of these reasons and more that I agreed to accompany a group of boys to the border as they pleaded for safety. We, the accompanying adults, had been prepared to receive an aggressive “NO” from border soldiers. We were also prepared to wait it out and allow a lawyer to seek patrol supervisors until someone would finally acquiesce and allow the boys to exercise their legal right.

So I was nervous walking down that long corridor, but not nervous for my own safety. I was scared for the children, for their opportunity to survive. One misstep and they could be deported back to Honduras, where some had witnessed relatives executed on their front lawns.

My fear began to shift and escalate once the border patrol soldiers realized that we would not leave. More Mexican federal police began to arrive. We were surrounding the boys when Mexican immigration police appeared and told us to move out of the way.

We had to move out of the way. We couldn’t allow the situation to escalate, putting the children at an even greater risk. We weren’t prepared to go to Mexican federal prison.

The officers emphatically spoke to the boys and began to march them away, back down that long and narrow corridor. As we attempted to follow them, we were given a choice: Turn around and enter the U.S. or be arrested.

As I crossed that ungraspable line on the concrete, I harbored intense shame and grating despair. What will happen to them? I wondered. Had our accompaniment been a complete betrayal? Will I ever see their faces again?

The boys were taken back to the youth shelter. Even though they were shaken and disappointed, they were, temporarily, safe. I saw them the next day. I had wondered if they held animosity toward us. But their warm and smiling faces greeted us. They hugged us. We prayed with them. I left them, this time willingly, yet wondered what would come of their struggle.

The children I accompanied were moving from violence to violence, each leg of their journey another encounter with unthinkable misery. They attempted to exercise their legal and human rights, only to find out that humanity and legality don’t count at the border.

There is an alarming discourse in the United States about “good” immigrants, about migrants who enter the country the “correct” way. We claim we will accept immigrants who are hard working and we claim to welcome migrants who follow the rules of a system we ourselves don’t even understand.

American exceptionalism will welcome the “good” immigrant, only until it’s more lucrative not to.

I think of all of the children and adults and families who have been forced to bow their heads and crawl on their knees and risk everything, laying their only hope into the grasping hands of the US government. And I remember that Mary Oliver wrote:

You do not have to be good.
You do not have to walk on your knees
for a hundred miles through the desert repenting.
You only have to let the soft animal of your body
love what it loves.
Tell me about despair, yours, and I will tell you mine.
Meanwhile the world goes on.
Meanwhile the sun and the clear pebbles of the rain
are moving across the landscapes,
over the prairies and the deep trees,
the mountains and the rivers.
Meanwhile the wild geese, high in the clean blue air,
are heading home again.
Whoever you are, no matter how lonely,
the world offers itself to your imagination,
calls to you like the wild geese, harsh and exciting -
over and over announcing your place
in the family of things.

The border can feel like a Godless place. It can be inundated with the religiosity of American exceptionalism and imperial fear mongering. But the border is not Godless. Wendell Berry says that there are no unsacred places, there are only sacred places and desecrated places.

And even though fear and greed have desecrated that space by creating a violent, invisible line, the migrants who dare to transgress the false gospel of empire carry the very good news of Jesus along with them. I saw God’s kin-dom manifest in the silly courage and grace demonstrated by teenage boys from Honduras.

They declared the year of the Lord’s favor with their feet and their tears and their laughter. Migrants who demonstrate a fervor for life will continue to poke small holes in the death machinery that we call national security. May we be brave and foolish enough to poke holes alongside them, until the whole death machine comes tumbling down and new life springs forth.

Rev. Smash is a pastor and organizer who recently moved from Charlottesville to Chicago.

(Image: The author, at right, performing a wedding with other clergy members in Tijuana. Photo courtesy of the author.)