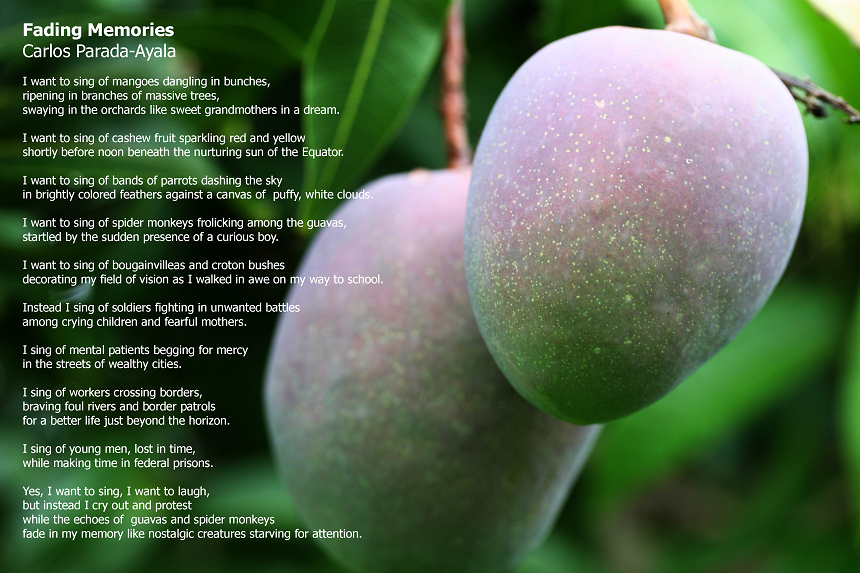 © Carlos Parada-Ayala Published in the anthology Poetry of Resistance:  Voices for Social Justice, ed. Francisco X. Alarcón and Odilia Galván Rodríguez, The University of Arizona Press, 2016. Reprinted by permission of the author. 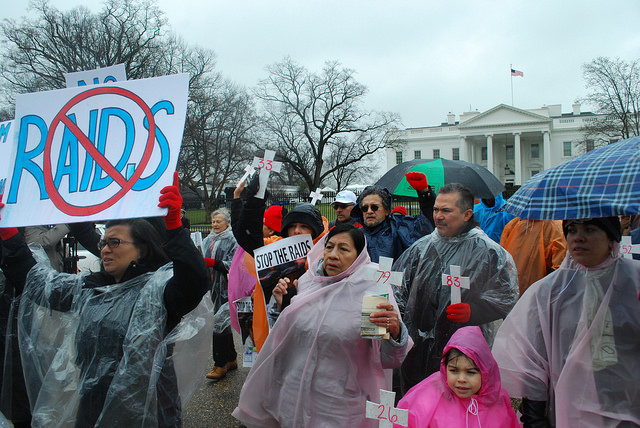 On Tuesday, February 23, fourteen of us dressed in black, wore red gloves to symbolize the blood on the hands of the Obama administration, and sat in front of the White House lawn to protest the increased deportations of men, women, and child refugees from Central America, especially those who have fled gang violence. Our arrest and the few hours of lost freedom were symbolic of the much worse fate awaiting many deportees.

Since December 2015, Immigration and Customs Enforcement (ICE) has accelerated raids on self-identified refugees from Central America.  Many are being sent back to their death.

As rain fell on the crowd, other protestors, many from religious groups, carried white Christian crosses commemorating the lives of the 83 Central American migrants who have been assassinated since 2014,after being deported from the United States.

“Look around you, and you will see 83 crosses. These crosses stand for 83 immigrant deaths that took place [since] 2014. All 83 immigrants came here to escape the terrible violence taking place in their home countries.”

Speaking of the thousands who come across the border, Matos said,

“Instead of welcoming them and giving them the protection that they so desperately need, our government arrests them [....] If the raids and deportations continue. . . [t]heir blood will be on his [Obama’s] hands.”

Although our red-gloved group was prepared to be arrested and offered no resistance, the police department sent about 40 officers, close to 20 cars, 12 motorcycles, and 6 horses to carry out the arrests.

Our demand is simple:  that refugees from Central America seeking asylum in the United States should be granted Temporary Protection Status (TPS) and furnished with legal representation so that they can establish their status as refugees seeking asylum.

In a clear indication of how dangerous life is in Central America, the Obama administration has pulled Peace Corps volunteers from El Salvador and Honduras. Similarly, the State Department's Travel Advisories recommend that U.S. citizens not travel to these countries, or to Guatemala, for the same reasons.  However, that same administration continues to deport families, including children, to those same countries.  Are not the lives of those fleeing the violence as precious as those of U.S. citizens?

I came to the United States from El Salvador in the late1960s.  I have been able to raise my children as citizens here in relative security.  But now millions of other Central Americans are trapped in an endless cycle of poverty and violence caused by the failure of their societies to free themselves from oppression, oppression in which the U.S. government collaborated.

It is not only immigration activists who should insist that the current U.S. Administration is morally responsible for any of the deported who are murdered after their deportation.  All U.S. citizens should recognize and respect basic human rights, including the right to refugee status for those fleeing violence.

Instead, demagogues and too many media outlets label desperate people as “illegal” and ignore their plight. We must put more pressure on the Obama administration to stop the deportations and treat people crossing the  border as human beings.

Carlos Parada Ayala is the author of the poetry book The Light of the Storm (Zozobra Publishing, 2013) and co-editor of the anthology Al pie de la Casa Blanca: Poetas hispanos de Washington, D.C. (North American Academy of the Spanish Language, 2010.) For his contribution to Salvadoran letters, the Embassy of El Salvador in Washington, D.C., awarded him the “Independence 2013” distinction.  He is also a recipient of Washington, D.C.’s Commission on the Arts Larry Neal Poetry Award. Photo: GBCSUMC