Searching for the Soul of the Black Church 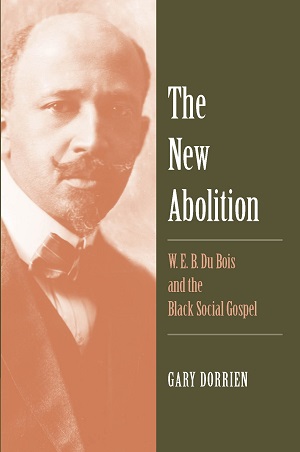 As another Black History Month comes to a close, and we reflect upon the 148th birthday of the brilliant William Edward Burghardt Du Bois on February 23, 2016, we take a moment to examine a text that discusses his invaluable contribution to the intellectual tradition known as the black social gospel.

In The New Abolition: W.E.B. Du Bois and the Black Social Gospel, Gary Dorrien, the Reinhold Niebuhr Professor of Social Ethics at Union Theological Seminary, does the difficult and important work of examining the intellectual foundation of the black-American religious institutions that were instrumental to the civil rights movement. It is also an examination of personalities at the center of these institutions during its growth—particularly Du Bois, who, while never officially a part of the “Black Church,” was nevertheless important to its development. It’s the kind of book I wish I’d read before graduate school. It takes historical black figures seriously as intellectuals and examines the genealogy of their thought.

Growing up, I, like many, was unaware of the rich intellectual tradition within the black community. I could talk about the athletic prowess of Jim Brown or Oscar Robertson or the musical genius of Sam Cooke, Big Mama Thornton, and Miles Davis. Yet, the only figures I knew as intellectuals in any meaningful way were Martin Luther King, Jr. (and really, he was more of an activist to me than a thinker) and Malcolm X (and he was scary to me because, though I did not know it at the time, he scared white people). Dorrien’s magisterial text brilliantly both tells the story of the development of the black social gospel and explicates the ideas of the great thinkers at the center of that narrative.

He takes a step back from the much-written-about civil rights era and examines the radical intellectual tradition that gave rise to the movement for social justice in the 1960s.  Ella Baker once said that “King didn’t make the movement, the movement made King.”  Dorrien takes this notion seriously and argues that the “movement did not come from nowhere” and that without this history “the radical social gospel theology and activism of King are inexplicable.”

Figures such as radical black nationalist Bishop Henry Mc­Neal Turner and writer/activist Ida B. Wells-Barnett are featured prominently. In fact, although Du Bois is central to the narrative, it is not until a third of the way into the book that he is investigated with any depth. The text reads as a series of vignettes about important figures and their ideas against the backdrop of larger cultural forces conspiring to marginalize people of color. The role of the Black Church as an incubator of radicalism and intellectualism becomes clear as the history of black religion in America is shown to be the thread that connects all of these stories. Yet, there has never been a unified, holistic position taken by all black social gospel intellectuals on the issue of civil rights or on how best to actualize the potentiality of the collective black community.

Dorrien is aware of this diversity of opinion and explicates the strengths and weaknesses of each with a careful and critical eye. He begins by examining, perhaps in too much depth, the strand of thought championed by Booker T. Washington. This position argued that hard work on the part of disenfranchised blacks assisted by philanthropic whites would begin to alleviate the ills faced by the black community.

He juxtaposes that position with the philosophical tradition embodied by thinkers such as Turner and Du Bois. They argued for black nationalism—either by immigration to Africa or by cultural affirmation—and political engagement. He then follows this nationalist thread to its eventual engagement with Marxism and activism centered on questions of economic inequality. Dorrien’s text is essential reading that, unlike any volume before, charts the development of the black social gospel while treating the figures at the center of the narrative as complex human beings and towering intellectuals instead of saints in a hagiography. As he summarizes the relationship of Du Bois to the Black Church, he does not conflate the relationship, he merely observes that Dubois was a man who had “a keen appreciation of Jesus, and a lover’s quarrel with the black church.”

Interestingly, this seems to summarize the position of many contemporary black Millennials—especially those engaged in the movement for Black Lives—regarding many black churches. And this “lover’s quarrel” raises difficult questions for the future of the black social gospel and black churches, which have historically been the home of movements engaging in civil disobedience and  attempting to better the plight of black people in America.

Although it is true that there has never been uniformity about how best to  combat racism, the philosophical rationale for social justice movements has usually been expressed with religious language and imagery, and the Black Church played a pivotal role as a place to meet and organize. Why, now, when a new civil rights movement is gaining momentum, is there relative quiet from some black churches? Why are too many of these churches reactive in the face of social injustice instead of proactive? Why do black pastors openly criticize the #BlackLivesMatter movement?

I think part of this has to do with the inability of many black churches to affirm the lives of those who operate outside the norms of sexuality articulated by traditional Christianity. Further, many black pastors decry racism and economic injustice while supporting ecclesiastical policies grounded in patriarchy. Take into account that the founders of the Black Lives Matter movement are black women, two of whom identify as queer, and you get the source of the tension. Further, many pastors think that the Movement for Black Lives needs a singular leader, but those with the movement push back against an authoritarian top-down approach common in many black churches.

There have always been secular elements in the civil rights movement. The Student Nonviolent Coordinating Committee was not grounded in a religious institution. Neither was the Black Panther Party for Self Defense. But rarely has there been a threat of a movement’s being almost exclusively secular. The contemporary #BlackLivesMatter movement has the potential to be the first if those engaged in the articulation and development of the black social gospel do not allow their thinking to evolve and become intersectional. The New Abolition: W.E.B. Du Bois and the Black Social Gospel both illuminates history even as it challenges us in the present. It is not an easy read, but it is one that rewards those who love the Black Church, black intellectualism, or, simply, black people.

Lawrence Ware is an Oklahoma State University Division of Institutional Diversity Fellow. He teaches in OSU's philosophy department and is the Diversity Coordinator for its Ethics Center. A frequent contributor to Democratic Left and a contributing editor to Religious Socialism, he has also been a commentator on race and politics for the Huffington Post Live, NPR's Talk of the Nation, and PRI’s Flashpoint.