The Nativity in an Era of Migration 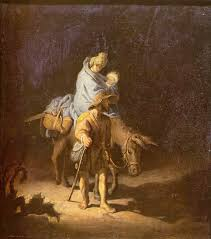 It’s that time of year again, with “Jingle Bells” in every mall, Jack Frost nipping at noses, and even a little Venite Adoremus for the Christian-inclined.  The Grinch will soon be in the White House, and we on the left can reflect on the Nativity story as it relates to this day and age.

Whether you are Christian or not, you are likely familiar with the outline of the story: the unwed mother and her fiancé who travel to Bethlehem to be registered for taxation by the Roman Empire and are without a roof over their heads when the time comes for Mary’s baby to be delivered. Scholars may dispute whether Jesus was actually born in Bethlehem or Nazareth, but modern preachers have used the text to speak of homelessness or of the despair of an unwed mother.

A not-so-modern prophet, Eugene V. Debs, noted in “Jesus: The Supreme Ruler, ” that where Jesus was born “matters little.”  For him, “whether Jesus was born at Nazareth or Bethlehem. . . .is of no consequence.”

What is of consequence to Debs is that Jesus “was born in a stable and cradled in a manger. This fact of itself. . .  certifies conclusively the proletarian character of Jesus Christ.” Debs’s imagery establishes Jesus as someone who was able to identify with the struggles of the working class. This year, though, the lesser-known part of the narrative--the escape into Egypt--speaks to us of someone who can identify with another struggling class, the millions of refugees in desperate need of sanctuary and safety.

In this part of the Nativity story, Matthew 2:13-15, Joseph is called to action by an angel who appears to him in a dream. The angel commands him to take his wife and the baby to Egypt to protect them from the slaughter ordered by Herod. Even if you see this section of the narrative as a forced theological connection linking the words of the prophets or even Moses to the infant Christ, you’ve read the true-life version in the headlines of the morning papers and the traumatized faces of refugee children. Modern parents have made impossible sacrifices to protect their children from danger.

The United States, among other world powers, does not have the greatest track record when it comes to refugees or large immigrations. One need only look at the Irish or Italian immigrant experience in the early twentieth century or the experience of Jewish refugees looking to escape the Third Reich. The rise of hate crimes in the wake of our recent election has offered little to no hope that such behavior has subsided in more “modern” times. However, some powers have offered a blueprint of what to do in this crisis, such as Canada, which opened its arms to Syrian refugees and also achieved comprehensive immigration reform, as well as France, which still  honored its agreement to accommodate refugees even in the wake of extremist attacks on the country.

The few verses in Matthew tell of a family fleeing state terror and of a neighboring state that shelters them. Refugees in the modern day know this story. It is no dream, but a waking nightmare. Countless children have had their childhoods ripped from them by war, murder, and greed. The tangled web of international agreements and treaties that are leading other world powers into these conflicts do nothing to assuage the situation; every United Nations Security Council meeting that gets harangued by countries in support of bombings that cause these displacements; meetings and hearings back in individual countries that go nowhere; and the ceasefires that are at best too-little-too-late and at worst ignored. These are the loose threads that, left unchecked, ensnare lives.

As country after country closes its borders or build walls of mistrust and hate, the challenge and work of empathizing with these people, especially the youngest among them, falls upon those of faith or at least of radical generosity and selflessness. Many groups of faith as well as secular groups have answered this call to action, setting up donation drives to offer money, material items, and desperately needed medical care or establishing networks that refugees can use in order to establish themselves in their host countries. Some of these groups are listed below and are worth your consideration of time and money.

If these current crises have taught even the most casual of observers anything, it is that these kinds of catastrophes that lead to migration can strike anyone. Today, would Debs’s view of Christ go beyond that of a poor, working-class child who suffered under an imperial and hierarchical system?

We can hope that Debs would have widened his vision and argued that there are many Christ children in our midst right now. These children and their parents seek a safe haven, a new homeland. Many have the ability and potential to make this world a better place if only they are granted a chance at a future.

No angel will reach out to these people with instructions on how to find safety. It is we who must fill the place of the angel and do all we can and make sure that our own borders are as welcoming and providing as those of Matthew’s Egypt. Whether it is by housing, donations, or support, care for refugees is the least we can do, as Christina Rossetti writes in her classic poem “In the Bleak Midwinter,”

“What can I give Him,

If I were a shepherd

I would bring a lamb;

If I were a wise man

I would do my part;

Silly ads for everything from automobiles to canned soup claim to represent the “reason for the season,” but our reason is clear. It is to reclaim compassion for those in flight.

For organizations you can look into, consider American Refugee Committee, Islamic Relief USA, United Methodist Committee on Relief, Mercy-USA for Aid and Development, or try finding the nearest chapter of the New Sanctuary Movement in your area, a group dedicated and inspired by faith to help migrants.

James Dooley is a graduate of Boston University’s School of Theology with a Master’s in Theological Studies.