The Poor People's Campaign and the Revival of the Religious Left 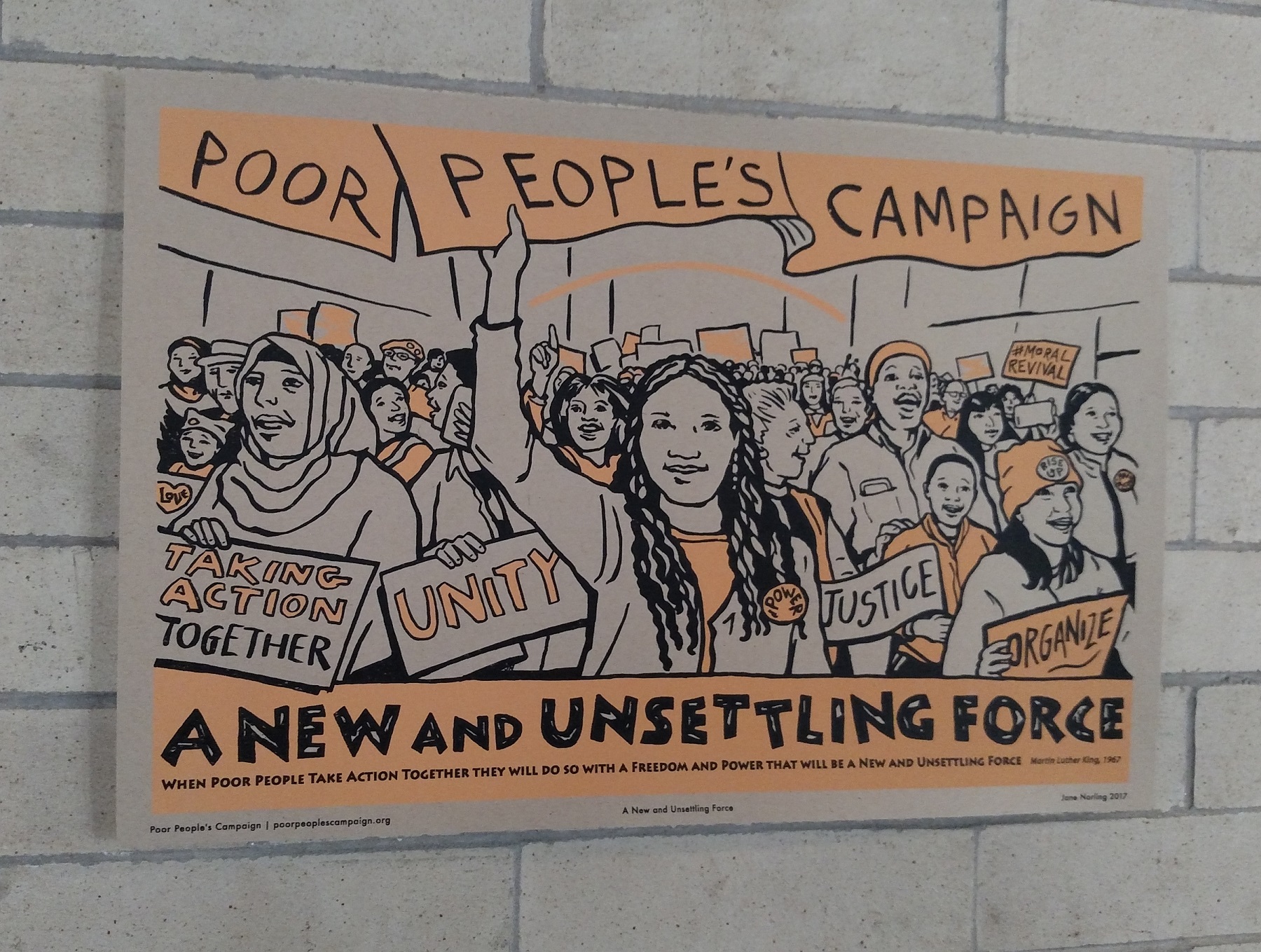 The Poor People’s Campaign will launch officially on May 13 and continue until June 23. DSA chapters around the country will be involved. This article, which we republish with permission from The Washington Socialist, lays out the rationale for the campaign and for DSA involvement in it.

It is true that we do meet churchmen of another kind. There exist some who are full of goodness and pity and who do not seek gain; these are always ready to help the poor. But we must admit these are indeed uncommon and that they can be regarded in the same way as white blackbirds. — Rosa Luxemburg, “Socialism and the Churches” (1905)

On the night of April 19, 2018, Sen. Bernie Sanders and Rev. William Barber II met for a conversation at Duke University. A self-professed democratic socialist politician joined forces with a Christian preacher to talk about issues of poverty, militarism, and systemic racism. The two men had different experiences and different backgrounds but spoke the same language. The political movement inspired by Sanders’s 2016 primary run and Barber’s Moral Mondays Movement intersected to become one movement in moving American politics.

The Poor People’s Campaign represents a resurrection of the religious left in the United States. To commemorate the 50-year anniversary of the original Poor People’s Campaign launched by Rev. Martin Luther King Jr., the organizers have prepared a similar campaign to take place across the nation from May 13 to June 23, the same dates as Dr. King’s campaign. Barber’s intent, as with all his activism, is to bring people together regardless of religious background, race, age, gender, sexual orientation, or political affiliation to create a “fusion movement” combining poor people from all backgrounds to make their voices heard by politicians they feel are not serving their interests. The schedule both by week and day is as follows:

Week 1 (May 13–19): Women, Children, and People with Disabilities in Poverty

Week 4 (June 3–9): Ecological Devastation and the Right to Healthcare

As you can see, the campaign embraces a variety of issues as well as tactics. These tactics include teach-ins, music and cultural influences, public rallies, nonviolent direct action, mass meetings. For an organization such as DSA, this campaign is in our wheelhouse, so to speak, as many of the issues the Poor People’s Campaign seeks to address are ours as well. DSA, like the Poor People’s Campaign, embraces the multiple tactics approach to organizing. They also have worked with the Institute for Policy Studies to produce an audit of the country since the last Poor People’s Campaign 50 years ago. (As you can imagine, their findings on economic inequality were stark.)

Evangelical conservatism, a force that had gained strength throughout the twentieth century, is on the wane. Enter the Rev. William Barber II, who has been a minister for the Disciples of Christ since 1989. Barber, who began the Moral Mondays in 2013 as a response to the voter suppression laws in North Carolina, expanded the movement to include other issues of race and class. Barber’s intent was to preach and protest to create a movement that would cut across racial and class and embrace people who felt they no longer had political power.

For most of the twentieth century, the left, particularly in Marxist circles, has always had an issue with religion. Marx had called it both “the opiate of the masses” but also “the heart of a heartless world.” Karl Kautsky wrote an entire book adding a class analysis to early Christian scholarship. Rosa Luxemburg wrote to Polish Catholic workers, reassuring them that while socialists criticize the clergy when they side against the proletariat, socialism had no problem with religion as belief. Luxemburg, like Kautsky, understood that religion had a prophetic side that often challenged the status quo. In the United States, the dialogue became lively as socialist activists like Eugene Debs joined a common rhetoric with theologians such as Walter Rauschenbusch and Vida Scudder. That tradition continued with Norman Thomas and Martin Luther King. The dialogue was damaged by Lenin’s own form of fundamentalism, of state atheism and antireligion programs in the USSR (note: the author has no issue with atheism and has organized with atheistic comrades), which had the effect of turning off would-be allies and giving rightwing opponents ammunition to combat the left.

Prosperity theology is a capitalist theology, promising that God would grant wealth and prosperity to all who believe; of course, it helps to give money to their popular preachers. The modern iteration began in 1947 with Oral Roberts. While not the entirety of the evangelical movement, prosperity theology has had a lasting influence in American politics. The revival of the 1950s in the United States was led by clergy underwritten by American businessmen, using religion to promote a capitalist Christianity. Even Billy Graham combated leftist tendencies in the United States. He spoke in 1951 about “the dangers that face capitalistic America” and for people to embrace “the rugged individualism that Christ brought.” It was a return to the anticommunism of the 1920s Christian fundamentalists.

By contrast, left-leaning clergy and theologians have always sought a return to the biblical values of relief for the poor and distressed, “the least among us.” Barber has said as much by calling himself a religious “conservative.” The Poor People’s Campaign of 2018 is an opportunity and an awakening. An opportunity for the secular left to join hands with religious comrades and allies, to create a larger movement. An awakening, because it revives a religious left long overshadowed by the right.

For this author, to see both my home religious denomination, the Episcopal Church, and DSA endorse the same movement, and seeing Barber and Bernie speak together in the same language, makes me wonder if a new chapter is emerging. For a long time, religion and socialism were thought to be incompatible. While there are atheists who are socialists, there is a rich history of religious ones as well. These “white blackbirds,” as Rosa Luxemburg called them, though rare in numbers have continued to exist, staving off extinction. It would be well for DSA to find a way to incorporate religious rhetoric in an anticapitalistic way. History has shown that when the left does not do this, capitalists will.

This campaign, if all goes well, will be the greatest direct-action event in the United States since Occupy Wall Street. What will happen during and after the forty days of action we shall see. It is hoped that a lasting infrastructure will remain in place. A partnership between a religious movement and a socialist movement is an opportunity that should not be overlooked. DSA should, like Rosa Luxemburg, offer religious activists and those who are religious within the working class an olive branch to join. The organization should continue to identify and work with the “white blackbirds” of this century. The Poor People’s Campaign is organized, disciplined and coordinated; such an organization is a formidable force against the ruling class. It provides our local chapter with an overwhelming opportunity to network with other activists but also meet the poor and working class where they are, hear their voices, and provide comfort and help. Finally, let our involvement in the Poor People’s Campaign challenge the capitalists’ age-old attack that we are a “godless ideology.” In truth, we are more righteous than they are.