The Religious Left in a Post-Roe World 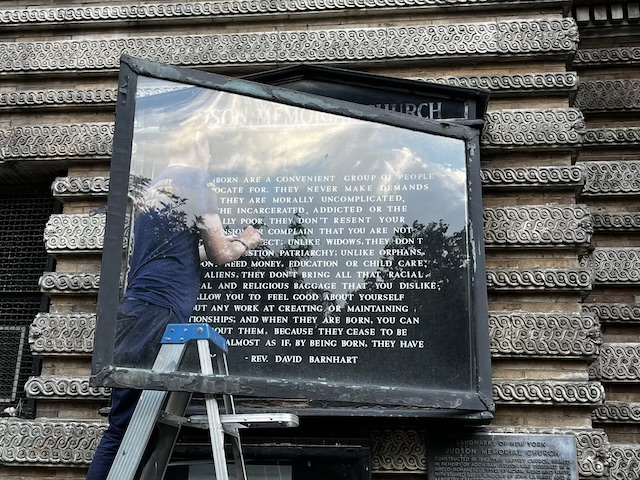 (Sign text) "The 'unborn’ are a convenient group of people to advocate for. They never make demands of you; they are morally uncomplicated, unlike the incarcerated, addicted or the chronically poor; they don’t resent your condescension or complain that you are not politically correct; unlike widows, they don’t ask you to question patriarchy; unlike orphans, they don’t need money, education or child care; unlike aliens, they don’t bring all that racial, cultural and religious baggage that you dislike; they allow you to feel good about yourself without any work at creating or maintaining relationships; and when they are born, you can forget about them, because they cease to be unborn. It’s almost as if, by being born, they have died to you.” -Rev. David Barnhart

Abortion was legal in the United States up until the 1860s and not condemned by the Catholic Church until a papal encyclical in 1869, followed much, much later by Protestant denunciations. Socialist feminists understand this as a wedge issue that allows so many other oppressions to operate. Justice Clarence Thomas more than hinted as much in his recent concurring  opinion overturning Roe v. Wade that outlined other rights soon to be on the chopping block.

Although opposition to abortion may be cloaked in religious language and is clearly a complicated issue, the Right has used it cynically to advance white supremacy and patriarchy in the service of capitalism. In the public mind, though, religion is the driving force behind this opposition, even though within religions there is a wide range of opinions.

What, then, are religious socialists to do, both as activists and as members of groups that hold differing opinions? Many religious socialists may themselves be in conflict. Where do we find common ground–with each other and with our secular leftist comrades? How do we aid the most vulnerable who have already been affected by class-based denial of rights (such as the Hyde Amendment)  and risk further danger.

Let us propose some areas of agreement;

Our struggle is intersectional

The Right openly uses our identities as leverage to pit us against each other, stoking fear and resentment to disguise attacks on our rights and grabs at power. Whether it’s our race or ethnicity, our gender expression, our use of language, our religion, the Right can find ways to keep us from looking at the true enemy.The only tool we have to combat these attacks on our humanity is the recognition that we’re all in this together—we need each other to succeed.

This principle shows up in our work is as follows. We as a group of people who often lean heavily toward white and male and sometimes lean heavily toward Christian must do better in supporting the work of women, people of color, and people of non-majority religious traditions, many of whom have spent lifetimes fighting the fight the majority of us are facing for the first time.. We must not waste efforts seeking new paths when there are well-established ones to follow. We must build on the work of our predecessors and our peers. We must continue to make an effort to be more inclusive in the work that we do.

We can reshape the dominant narrative around abortion

Abortion was legal until it wasn’t, and low birth rates undoubtedly have something to do with it. The papal encyclical was issued the year that France experienced its lowest birth rate ever. Pundits have been bemoaning the lack of replacement births in the United States for several years.

The underlying reasons for wanting to force people to carry pregnancies to term regardless of health or social reasons is more complex that just wanting more workers, but  abortion has often been weaponized by those whose real motivation is to wrest control of our country away from the people and back into the hands of already powerful groups.

We must avoid demonizing a particular religion because we know that the overarching forces behind this successful 50-year campaign are greater than any one theology. The triple evils of capitalism, white supremacy, and patriarchy combined to set us back half a century and must be stopped before further rights are demolished.

The religious Left has a long history of pushing back, which means that in standing  up for abortion rights, we are walking in the footsteps of ideological and spiritual ancestors whose work we can study and whose powerful legacy we can use  to inform our own work. Imagine the power we could wield as a movement if we could correct the misconception that this legacy doesn’t exist. We would have control over the narrative of history, which is a powerful tool that can be used to shape minds and change the course of legislation.

Language is not neutral

We must retake control of the language that is used to discuss the issue of abortion. We must not allow conservatives to launder racism and religious bigotry using pseudointellectual language that limits our ability to think critically about this issue. In fact, we must feel free to defend abortion in the language of our own religious traditions, which, to those of us who practice, are an important part of not just our identity but also our humanity. And we, as religious socialists, must protect the rights of all people of all religious backgrounds to defend their rights to abortion using their own language and on their own terms..

What is our particular role in this fight, as religious people? What spiritual and ideological tools, what sources of people power do we have? What common ground can we find with those who oppose abortion but understand the desperation faced by those experiencing pregnancy in a culture that has almost no social supports for children outside the womb?

What you can do

If you are a member of DSA, you can join DSA’s official abortion rights campaign, which holds workshops on developing an organizing strategy for your geographic context. You can also seek out and join in with your local chapter’s efforts at organizing resistance. If you’re a New Yorker, for instance, you can help NYC-DSA lobby for the passage of state laws S8778, S757, S7002, and the New York Health Act, which will help secure the right to choose in New York State.

If you’re a religious socialist, we encourage you to join us in the fight to change the narrative about the relationship between religion and reproductive justice. The NYC chapter of the Religious Socialist Working Group’s Abortion Rights Subcommittee is currently forming a coalition of religious and community leaders and abortion rights activists that will generate content such as papers, panels, and workshops. You can find out more by emailing us at [email protected]

For religious socialists who feel uncomfortable with the topic of abortion but would like to help protect the health of people who will be affected by restrictive laws, you can join DSA’s campaign to pass Medicare for All. You can also join in on DSA’s work on the broader issue of reproductive justice, which includes, according to NY  DSA’s plank on the topic: demands for free and universal childcare, paid parental and family leave, and other provisions that have been shown to improve quality of life and decrease mortality for birthing parents and infants.

If you’re not a member of DSA, you can find an abortion fund to make a donation to at the DSA-approved National Network of Abortion Funds. If you’re in a state where abortion will likely continue to be legal over the coming years, we urge you to use your privilege do even more—by lobbying your state government for increased protections for abortion seekers, including sanctuary laws, and perhaps by committing to housing or otherwise supporting those who travel to your state to seek abortions from states where abortion is or will be illegal.

And finally, anybody can seek out and participate in protests. Visibility matters in this fight, and we hope that you will choose to stand with us in opposition to the destruction of this basic human right.