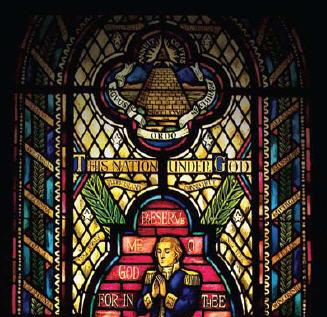 During his dust-up with House Speaker Paul Ryan, the Rev. Patrick J. Conroy, S.J., revealed himself to be something Ryan is not: a man of conscience. This should lead Father Conroy to do the only honorable thing possible in his position. He should resign, this time for good—but not because Paul Ryan wants him to.

The House of Representatives should not have a chaplain, because taxpayers should not be paying for a faith leader either to provide pastoral care to members or to bless the proceedings of the body. We have something in the United States called the "Establishment Clause” that clearly makes such a position unconstitutional.

As a U.S. taxpayer, I object to keeping clergy employed on my dime. As a Catholic, I object to Father Conroy’s presence in the House because it cheapens the sacred. My faith means something. It should challenge every Catholic to work toward a peaceful and just world.

Whenever we inject prayer into state events, we paint them with a veneer of sanctity that they do not deserve. It is a lie to open a session with a prayer and then propose cuts to food stamps or to spend massively on weapons of war. Beginning with prayer tacitly implies that God is smiling on the House of Representatives. Religion becomes, as the man said, the opiate of the people.

Many observers have speculated that Father Conroy got himself into hot water back in November when he prayed before the tax debate: “May their efforts these days guarantee that there are not winners and losers under new tax laws but benefits balanced and shared by all.”

When he said that prayer, he was not a chaplain. He was a priest. No one can be both simultaneously. One’s role is to bless the status quo; the other’s is to challenge it.

I do not know Father Conroy personally, but he seems like more of a priest than a chaplain. He should go with the higher calling.

Father Conroy reports that he was originally told by Ryan’s chief of staff, Jonathan Burks, that the termination was because "maybe it's time that we had a Chaplain that wasn't a Catholic." Burks disputes the account, but I’m inclined to believe someone who works for Jesus over someone who works for Paul Ryan. Father Conroy has gone on to claim that the action smacked of anti-Catholicism. The news was filled with stories about how the Catholic Speaker Paul Ryan did not want a priest who was influenced by “liberal Pope Francis.”

First: Paul Ryan has spent his career trying to make life more difficult for poor people. He clearly does not bring his Catholicism to work, so it’s no surprise that as Speaker he clashes with the resident priest.

Second: Francis is, more’s the pity, not a liberal. He is a gift to the world and the church because he, more than any pope in my lifetime, tries to live in an authentically Christian way. Standing up for the poor and the immigrant, however, has consistently been an imperative of Catholic social teaching under even the most conservative of modern popes. When Father Conroy prayed that the tax plan would produce benefits “shared by all,” he was not being a Democrat. He was being a Catholic.

Third: There is plenty of anti-Catholicism in politics. In the past year, Dianne Feinstein and Steve Bannon both said offensive things about my faith. (Perhaps we Catholics should be proud to be one thing that people across the political spectrum can agree upon. Blessed are the peacemakers!)

But Father Conroy is not noxious to Speaker Ryan specifically because he is a Catholic priest. It is because he stood up for fairness and compassion, principles that every great religious leader in history has endorsed. Being universal, however, does not make them non-controversial.

People of faith must be prophets. We must call for our society to do what is difficult, to sacrifice comfort for justice. In my tradition, prophets did not prosper. They were rejected, mocked, beheaded. That’s because telling God’s truth to power is always a revolutionary act—and nobody wants a revolutionary on staff.

Colleen Shaddox is an activist for juvenile justice reform and author whose work has appeared in the Washington Post, the New York Times, and many other venues. More about her non-fiction and fiction can be found at www.freecolleen.com.