To Praise And Not Just To Describe 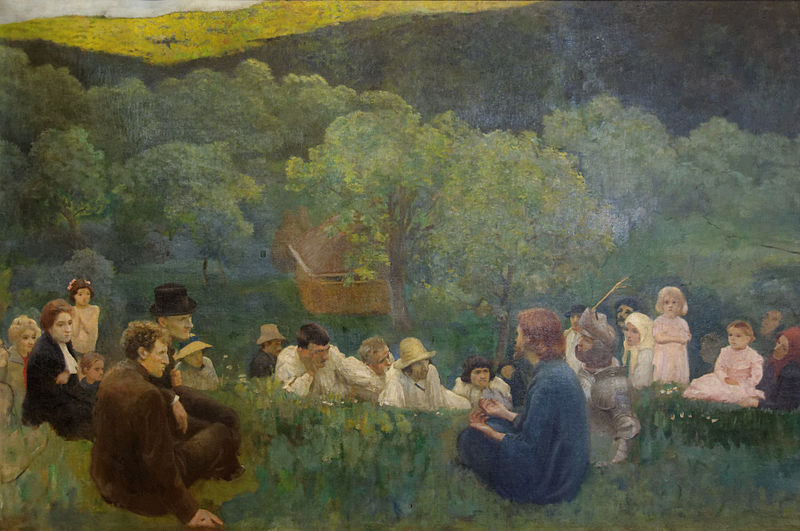 From the RS archives, this is the second of three talks offered on a panel discussion of religion and socialism at the November 1979 conference of Democratic Agenda, a coalition supported by DSA’s predecessor organization DSOC. We posted the first talk recently and will post the third (by Arthur Waskow) soon.

Brothers and sisters, friends and comrades:

Since it is Sunday morning, I am going to preach a little too. I was thinking of the saying from Jesus’ teaching in the Sermon on the Mount, where he says, “Set your mind to God’s kingdom and its justice, before everything else and all the rest will come to you as well.” [Matthew 6:33] Now we know today, better than we did know before, to whom Jesus spoke. That is another part of the exegesis that Harvey Cox was talking about. In Europe we call this “materialistic exegesis” or “reading materialistically” the gospel or Bible.

We are interested in to whom it was that Jesus spoke. What was this first Jesus movement, sociologically and economically? We know that these people were very poor. They were the rural proletariat. They were so hungry that they plucked ears of corn on the Sabbath. They were landless fisherman who owned nothing but their nets as means of production. It is to them that Jesus talks about the revolution that is the kingdom of God and its justice—a domination-free society. I don’t want to talk about the “Bible thieves,” as Thomas Munster (a left-wing Christian at the time of the Reformation) called the people who misinterpreted these clear words about rich and poor people, about liberation of the oppressed and justice for all. They misinterpreted this in the interest of a spiritualization, that is an individualistic religion oriented toward a life after death. I want to talk about another kind of spirituality that I see growing around me, around people who are in this whole movement of Christian socialists. We might call it a “socialistic spirituality,” if you don’t mind this expression.

When we look into the history of the Christian-Marxist encounter, we can distinguish different steps.

One is, as Roger Garaudy put it, “from anathema to dialogue”—from a stone age antithesis to an attempt to understand each other, to find what Christians and Marxists have in common. This step was made in the Sixties.

I think we are now in another phase of the encounter, and I would call this the second step “from dialogue to alliance”—an alliance which works out much more practically in the struggle, in strike committees, in class struggle, and in torture camps where Christians and socialists together are working in an alliance.

But there is a third step, and that is what I want to talk about today. This has to do with more than alliance—rather with a new kind of identity which I will try to define. It is not easy really to say what this new kind of identity is, but I can’t split up my life by saying I do this as a Christian and that as a socialist. It doesn’t make any sense to me to talk this way. I am one. I am a socialist and I am a Christian, but I have only one mind and one conscience. I live in and with and for both communities. I try to live this new socialistic spirituality in search of the kingdom of God and its justice.

When I became a socialist during the Sixties, many of my Christian friends who made the same step forward left their faith. This is simply a fact, an experience. I was sad to see how they lost their faith. It happened slowly. The church was weak, boring, stupid, and so often on the other side of the fence. The church didn’t nourish these friends and they forgot the church. They forgot the whole tradition. They didn’t change the community of believers, but rather left—some with nostalgia, some with sadness.

This was not so for me or for some of my other friends who stayed in. As a growing number of Christian socialists, we experienced our faith being deepened and clarified through becoming socialist. Maybe our theology was a little better, a little less mythological. I mean theology here in the strict sense of the word—the logos of God, the concept of God which is behind that.

When I became a socialist I was living in a theological phase that I called “atheistically believing in God” or “living after the death of God.” That means living after the death of a superhuman, supernatural being who interferes immediately in history. I couldn’t buy this any longer. The second verse of the “Internationale” goes like this: “There saves us no higher being, no god, no Caesar or tribune.” We have to do it ourselves, it goes on to say. I could sing this wholeheartedly. God has no other hands than ours. God does not exist in an outside-of-the-world supreme being. He or she happens in the history of human beings, in their exodus from slavery in Egypt, and in their resurrection from the dead.

I do not feel less atheist than maybe the majority of those who have no religious affiliation of who have left the churches. Atheism or theism is not the problem of faith today. I think the kingdom of God and how to seek its justice is our problem. This God of justice is not a God for the hereafter, for the above. He or she is an ultimate concern for this world. When I talk about my faith problems, my doubts, my fears, my lying awake at night, it’s not how to believe in a life after death that worries me, but rather how to believe really in a life before death for the majority of people. I have to believe, I need faith for that. I don’t see it. I don’t see that people are living. I see a lot of dead people running around. I can’t call this seeking after profit and career “living”. I can’t name this “life”. So I need faith to see, in the empty face of my neighbor, traces of his or her being created in the image of God. I think that cynicism is a much more natural response to life in late capitalism, than believing in resurrection out of the death we are in.

If God is not the “Heavenly Intervener,” what is the advantage or surplus of being a Christian? This is a question that I’ve been asked a hundred times at least. And I’m always wrestling with it and still think that my response isn’t totally satisfying. But that is the business of theology—to give better answers to this question. Let me try it once more.

I am living out of a tradition that leads, in my opinion, to socialism. There is no doubt about that. But this tradition helps me to understand my life better because socialism has not yet developed a culture that is rich enough to express the depth of our needs. As a Christian living out of the tradition of the community of believers, I’ve gotten a language to talk about our needs, and this is the surplus. It is a means of communication. I agree with Abraham Heschel, the Jewish theologian, that the deepest need of human beings is to be needed, to be counted on, to be there for and not just to be an unrelated being. Life is sacred. Bread is sacred—the bread I eat and also the bread I refuse to give to my brothers and sisters. Sexuality is sacred. We need to communicate this sacredness of life—about the promise of life, about our hopes and our fears.

Socialism, as I see it, so far has developed a scientific language. But humans don’t live by science alone. I need more language. I need a language for my wishes, for my dreams. I need to pray. I need to pray with others. I need to share hope with others, to listen to the old stories, to refresh my memory that some have already left Egypt and the realm where death is produced and worshipped. I need a language to talk about our needs, a narrative, a singing language. I need to praise and not just to describe. So let me just try to praise a little by ending with a little poem that I’ve tried to translate.

with wishes it is this way

some just fly into the goal

others stumble and crawl

many die too early

and end up in the garbage

and leave father and mother

and sometimes they call

at night from the cell

then we wake up and know

there was something there

with religion it’s this way

a house in which wishes are

this we call a church

please come, cleanse me, lead us

this we call a prayerbook

a remembrance of the dead

and of their living wishes

this we call communion

the story of a man

who wished more deeply than we do

this we call the gospel

Dorothee Soelle was a German political theologian who for many years taught at Union Theological Seminary in New York City. She was the author of many books, including works of theology and poetry.

(Image: Károly Ferenczy, The Sermon on the Mount, via Wikimedia Commons.)