To Rev. Angela Cowser, “the Biblical Basis for Socialism Is Undeniable” 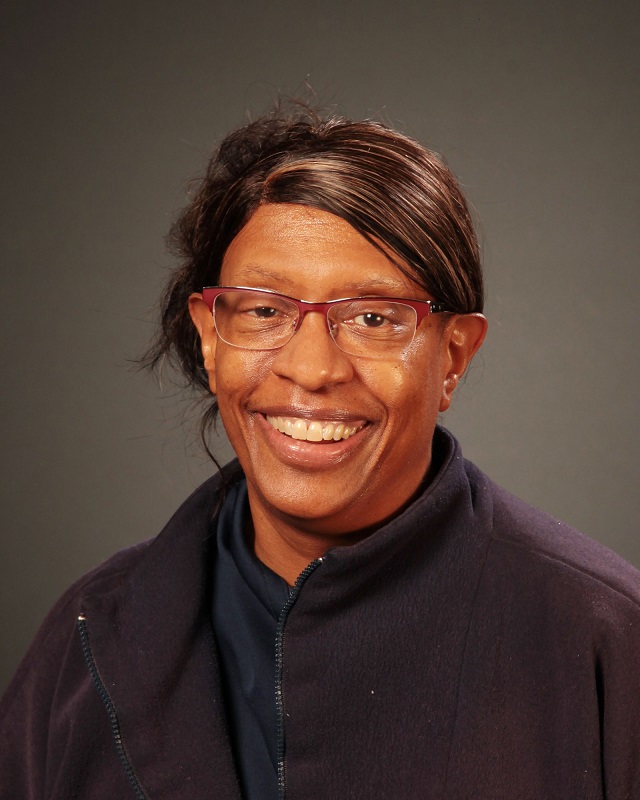 This article was written by a member of the Religion and Socialism Working Group editorial team and originally published in Jacobin:

When Angela Cowser, co-chair of the recently launched Institute for Christian Socialism, talks about her life experiences, she uses the word “dissonance.” A lot. It starts with her childhood in a middle-class black family in Memphis, Tennessee and continues with her years at an Ivy League school. The same goes for her time as a community organizer, and now her role as a Presbyterian minister and seminary dean and professor.

“For much of that time, definitely when I was a child, I had no language to explain it,” she says. “I just knew it didn’t make any sense to me. Starting with: Why did I end up in a middle-class home and healthy community, when I could see so many children did not?”

In the Cowser home, her father, a band director at a public school, instilled an appreciation for music that led to her playing violin at a concert level. Her social worker mother made it a point to bring home white colleagues to join the dinner table — not exactly the norm in 1960s Memphis.

The family attended an Episcopal church that catered to economically comfortable black families like theirs. But that church was located in the middle of the Foote Homes public housing complex in a deeply poor neighborhood. And the pastor was a white man, even though the pews were filled with black worshippers.

Cowser was eight years old when Dr Martin Luther King Jr was killed at the Lorraine Motel, just a few miles from that family church. As she grew up, she struggled to make sense of the assassination. She learned how unpopular King’s economic justice and antiwar messages were in his last years. White Memphis fiercely resisted the campaign he died supporting, a strike by the city’s mostly black sanitation workers for safe working conditions and living wages.

“Dr. King was talking about race and economics, and he was preaching nonviolence, which is what Jesus talked about,” she says. “But he was shut down and misunderstood by the majority of white people, who were mostly Christian. I had to wonder: Do those two words, ‘white Christian,’ even go together?”

She had left the church when she went away to college, repulsed by the disconnect between the Gospels and the world she saw in the workplace, the classroom, and the halls of government.

As Cowser and her sister Valerie entered their teenage years, their parents insisted they work part-time. Cowser got a job at a restaurant, serving food and cleaning up alongside white working-class colleagues, serving the city’s gay community in the wee hours, and enduring sexual harassment and discrimination. When Cowser, a star student and now a violin virtuoso, went away to Brown University, she continued to work to pay the bills, this time at the school cafeteria, the Ratty. Meanwhile, her fellow students flew to Switzerland for the weekend, or to one of the three or four vacation homes owned by CEO parents. John F. Kennedy Jr was a classmate.

“For me, that was when the rhetoric around meritocracy and pulling yourself up by your bootstraps all collapsed and fell apart,” she says. “My roommates were jetting off while I was heading to work in the kitchen, and I knew I was not dealing with a level playing field.”

At Brown, women’s studies professors introduced Cowser to the concept of socialism. As she began to read Marx and Engels, it reminded her of the biblical messages she grew up with. She was not surprised to learn that Marx came from a long line of rabbis.

“By then, I had spent several years realizing that things were not right in our society. And now I saw there were other ways to organize an economy that reward people for their work and enable them to sustain themselves. Capitalism was doing that for some, but it was leaving a whole bunch of other people to suffer and die. And I learned that these class issues could not be divorced from race and gender.”

After graduation, Cowser worked in a variety of jobs — managing symphony orchestras, programming computers for hospital systems, helping run a nonprofit that served the homeless — and earned a master’s degree in international relations. She had left the church when she went away to college, repulsed by the disconnect between the Gospels and the world she saw in the workplace, the classroom, and the halls of government.

“I was an active Christian, though,” she insists now. “I still followed Jesus. I just wasn’t in a church.”

By the time she found her way back to church, it was back home in Tennessee. Cowser was hired at Tying Nashville Together (TNT), a grassroots advocacy organization tied to Saul Alinsky’s Industrial Areas Foundation. As she helped TNT push for after-school programs, improved public housing, and transportation, Cowser discovered she had a gift for organizing people.

She was especially effective with people in the faith community that constituted TNT’s power base. “Angela was and is a hard person to say ‘no’ to,” says Ray Sells, a retired United Methodist minister who volunteered with TNT. “She knows how to ask people to do things . . . and, if need be, to demand they do them.”

Some of the congregations TNT sought to mobilize were led by pastors who were already eager to engage with political activism. Others took some convincing.

“Angela would build relationships with people in the congregation and serve as an on-the-ground teacher about how faith principles demand action to address injustice,” Sells says. “Eventually, their pastors realized that they had to work with her.”

TNT became known for pulling together large crowds of people to confront lawmakers in public settings, for framing its demands in moral and faith language — and for winning. Both the city council and chamber of commerce made significant concessions to TNT’s demands, including establishing a youth outreach worker project and a Neighborhood Justice Center that mediated neighborhood disputes, restructuring the Nashville bus network, and securing $250 million in new funding to improve public school infrastructure.

Cowser returned to school to earn a doctorate at Vanderbilt University. She is an ordained Presbyterian minister and serves as a professor and associate dean at Louisville Presbyterian Theological Seminary; she wrote a book and numerous scholarly articles.

But her colleagues say she is still an organizer. Through the United Methodist Church, she is organizing anti-poverty, pro-justice campaigns in eastern Ohio at the neighborhood, congregation, and community levels. And she pushes her seminary students and colleagues to transform the socially powerful churches those students will be leading into institutions that challenge income and racial inequality.

“Angela does not put up with idealistic fluff, either from her students or her co-instructors,” says one of those co-instructors, Tim Eberhart. Eberhart taught alongside Cowser at Garrett-Evangelical Theological Seminary in Evanston, Illinois, before she took on her associate dean position at Louisville Seminary.

Cowser insists that all social and theological discussions be grounded in the lived reality of people who struggle, Eberhart says, and she is not shy about invoking her own life experiences as examples.

“She makes it clear: we need to organize people, money, and institutions. That is how social change happens.”

A Socialism Rooted in the Gospel

To Cowser, there is a name for what that change should look like: socialism. She helped create the Institute for Christian Socialism and regularly speaks and writes about the topic. She has studied extensively the cooperative wealth-building systems created by shack-dwelling women in Namibia, which she considers to be socialism applied in one of its purest forms.

The biblical basis for socialism is just undeniable. Just look at the early books of Acts, where the body of believers responded to poverty — and a very gendered poverty — by organizing money and resources for the benefit of poor people.

“I realize now that you can draw a through line from the eight-year-old girl in Memphis to all the organizing and teaching I’ve done and continue to do,” she says.

Of course, identifying as a socialist can create some challenges in that organizing. For example, Ray Sells, the retired Methodist minister, is not as excited about her embrace of socialism.

“I don’t see the reason to use that word,” he says. “It just turns off so many people from the start. Why can’t we just advocate for things like affordable housing and good public education without putting on a label with all those negative connotations?”

When Cowser is told about Sells’s objection, she nods in understanding. But her experience is that talking about socialism in faith communities is less problematic than Sells and others expect — especially when the conversation is with younger Americans, who polls show prefer socialism over capitalism on average, and black Americans, who similar polls show are likely to hold favorable views of socialism.

“I actually don’t get much pushback on it,” she says. She points out that church communities with strong tithing and aid cultures and healthy union workplaces are already quite socialist, as are many American institutions like public schools, infrastructure, and public safety.

“Plus, the biblical basis for socialism is just undeniable. Just look at the early books of Acts, where the body of believers responded to poverty — and a very gendered poverty — by organizing money and resources for the benefit of poor people,” she says. “And the Jubilee platform in Deuteronomy lays out the whole program for a sharing economy where no one person can be strong without the community being strong.”

The Institute for Christian Socialism, where Cowser and Eberhart serve as cochairs, aims to lift up that message and build a movement around it. They point out that the right wing in the United States may publicly ridicule Alinsky/Cowser-style organizing, but it has often successfully adopted similar practices. So the ICS is modeled in part after the conservative Institute on Religion and Public Life, which publishes the influential Christian journal First Things. The ICS publishes the Bias magazine and hosts events highlighting activism and scholarship on religion, politics, and public policy.

To Cowser, these Christian socialist efforts are not a departure from her lifelong battle against racism and sexism: they are fundamental to the struggle. People of color and women forced to live on low wages won’t realize their freedom until their labor is no longer exploited, she says. Racism and sexism will begin to crumble when the community’s wealth these workers create is distributed on a just basis.

“We want to deconstruct the word socialism as a slur and reconstruct it as a new possibility for a society that gives everyone the best chance to thrive in life,” she says. “Once you put it that way, especially with socialism’s deep connection to scripture, it’s hard to argue against it.”