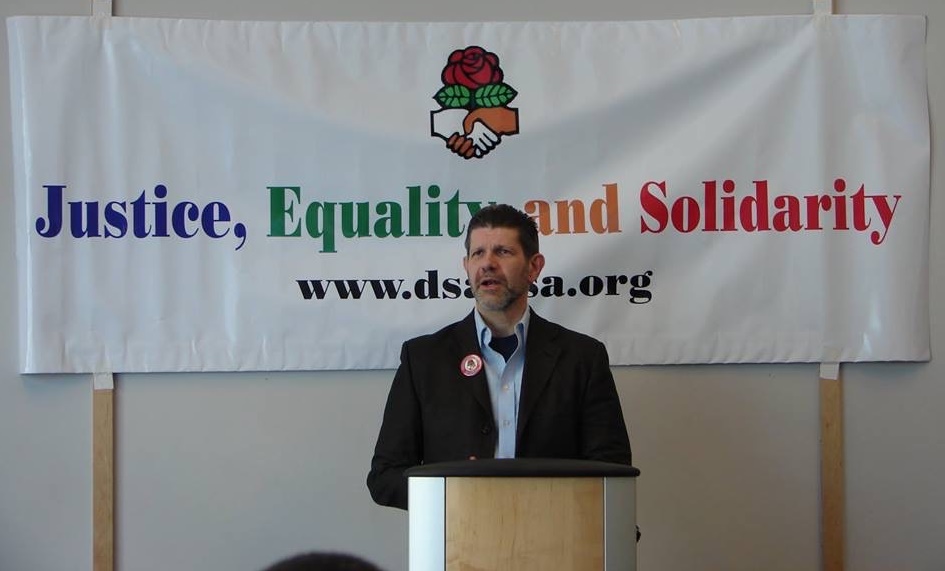 “A Deep Connection Between Being Jewish and Being Socialist”

“A Deep Connection Between Being Jewish and Being Socialist"

This profile of longtime DSA activist David Green is jointly published with Sojourners and Faith in Healthcare.

Dr. David Green, a neurologist in the Detroit suburb of Farmington Hills, can cite to you multiple disturbing statistics about the U.S. healthcare crisis, including the fact that more than 27 million Americans do not have health insurance.

But he would rather talk about the individual patients coming through his examining room as living proof of the crisis. “A month ago, I diagnosed a young 23-year-old man with ALS (amyotrophic lateral sclerosis),” he says. “By that time, he had been dealing with symptoms for several years. He could barely walk, but he was still working full-time. Yet he had no health insurance.”

Green has other examples. “Every week, almost daily, I see patients who cannot afford care, can’t afford their medication,” he says. “Some of them do have health insurance. But it doesn’t cover what they need.”

Many of his patients, including some with Alzheimer’s disease, head injuries, or developmental disabilities, need neuropsychological testing. On paper, the Affordable Care Act guarantees their insurance policy should cover essential services like the test. In reality, Green’s patients struggle to find a psychologist who will accept their insurance. The few who will accept his patients’ insurance often have waiting lists as long as a year and a half.

“When you see the effects of for-profit healthcare over and over, when you see us treat healthcare in this country as a commodity rather than a right, it doesn’t take long before you become a single-payer advocate,” he says.

So Green has been a longtime member of Physicians for a National Health Program. His commitment to healthcare for all is bolstered by his eyewitness experiences with the broken U.S. system, but it did not begin there. “Growing up Jewish, I learned early on that one of the tenets of our faith is a commitment to social justice,” he says. “The way we show reverence for G-d is not just through ritual, but how we respond to human needs. The idea of tikkun olam, healing the world, presumes it is broken. We are called to act to fix it.”

Beyond healthcare, Green noticed other broken parts of the world around him in Michigan. He looked at the poisoning of the water in his hometown of Flint, the profiteering off of public education in poor communities, and the state government’s attack on labor unions through a right-to-work law. “All of these struggles have a common denominator,” he says. “Capitalism. There is a systemic reason for all of this poverty and inequality.”

Beginning in 1996, Green chaired the Detroit chapter of the Democratic Socialists of America (DSA) for more than 20 years. Many of those years were not easy ones to be an active socialist in the Midwest. “David kept democratic socialist ideas alive during a period where most people were afraid to use the name,” says Maria Svart, national director of DSA. “He built a reputation for DSA of doing the hard work of knocking on doors during election season.”

Svart remembers accompanying Green to a rally responding to the Flint water crisis, and noticing that Green made sure to wear his physician’s white coat. “David leveraged the respect often afforded to health care providers, especially doctors, in solidarity with the residents of Flint,” she says. “When he was approached by media covering the event, he talked about the health impact on children in Flint of lacking access to unpoisoned water.”

In addition to responding to the Flint crisis, the chapter waged successful living wage and anti-sweatshop campaigns and supported progressive Democrat candidates in nearly every election cycle. DSA efforts in Michigan were so energetic that a capitalist think tank in 2009 wrote a worried article, “Are Socialists Deciding Close State House Races?”

The evidence suggests the concerns were well-founded: the Michigan DSA helped dozens of progressive Democrats get elected to local and state offices. The chapter’s impact now reaches all the way to Washington, with new Congresswoman Rashida Talib a member of the Detroit DSA.

For many years, the Detroit chapter was the only one in the state. Now, as the DSA national membership has swelled from 6,000 members in 2015 to an estimated 50,000-plus, there are chapters all across Michigan. Members’ average age has dropped by decades.

It is a trend that gives Green hope for a future that realizes the vision his faith tradition calls for him to pursue. “There is a deep connection between being Jewish and being a socialist,” he says. Green’s parents agreed, both joining the DSA chapter after he did.

“It is important to light the Shabbat candles, but our tradition says we cannot stop there,” he says. “Do you feed the hungry? How do you treat the poor? And are you doing what is necessary to create a just society?”