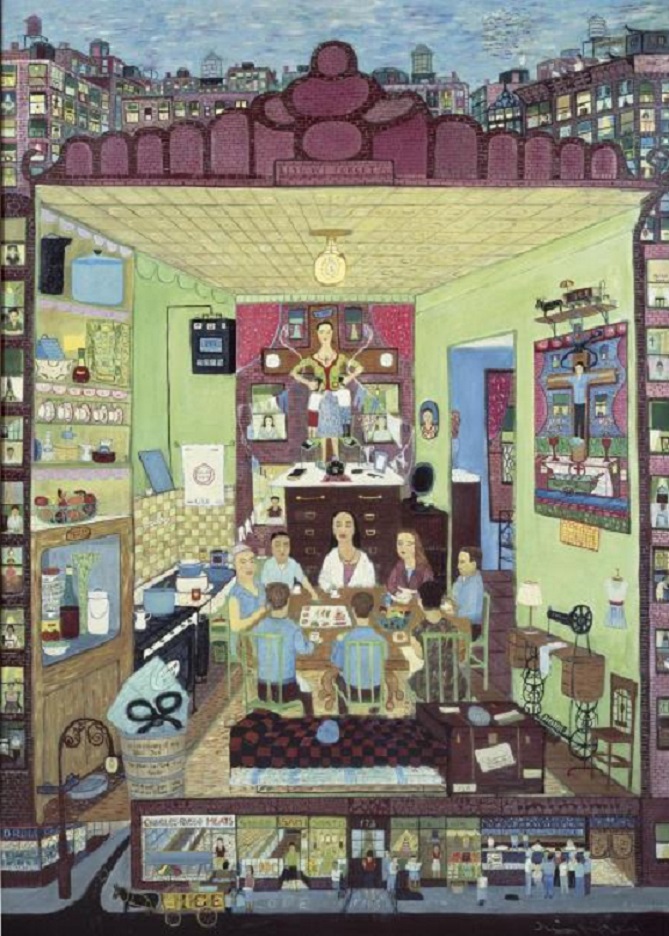 When I was growing up, every Sunday after Mass we would have a large and bland family dinner that seemed to last an eternity. At some point, while I was pushing mushy peas around my plate, my father would launch into his weekly tirade about the welfare queens supported by his hard-earned tax dollars and the damned liberals who made this mess.

I was eight or nine when I said to him, “Daddy, you shouldn’t talk like that. If you read the Gospels, you’ll see that Jesus was a liberal.”

He sent me to my room.

In that afternoon, I had my first experience of witness and of excommunication.

Geoffrey Kurtz’s essay, “Two Questions for Religious Socialists,” put me in mind of that father/daughter dispute. The comrade’s first question was, “What aspect of religion are you linking to socialism: texts or practices?” Clearly, my path to the Left ran through scripture. The Gospel readings showed me a Jesus who was in constant service to the marginalized and, for the most part, opposed to violence. He defied those in power, particularly when they oppressed people in poverty. This shaped my earliest political leanings as a child. This shapes me today. But I realize that I’ve overlooked practice, to my loss.

The only practice I understand in any depth lies in Roman Catholicism. “Understand” is not the best word, as it implies some kind of definitive intellectual grasp of a thing rooted in mystery. I don’t understand my religion. But, like the rhythm of my own heart, I know and need it. The center of my practice is of course the Eucharist, the biggest mystery of them all.

On those long-ago Sundays, far more Catholics attended Mass regularly. It took twenty minutes to get out of the parking lot. In the quiet after taking Communion, I would listen as people continued to receive.

“Body of Christ,” the priests would say.

“Amen,” came the answer, over and over.

It was music. Of all the cadences, of the prayers, this was the most beautiful.

I still love that sound, though it does not last nearly so long these days, as Communion lines are getting shorter. I like the idea that we’re all in it together. Every one of us gratefully receiving a gift we cannot possibly deserve. Every one of us believing in this impossible presence in our midst.

Many years later, as I listened to that music, a priest friend was getting himself involved in a minor Eucharistic controversy by giving Communion to our state’s governor, a divorced and remarried Episcopalian. It was at the funeral of an archbishop, so there were journalists present. As is often the case at Masses attended by non-Catholics, the program specifically directed people from other faiths not to receive the Eucharist. Perhaps the governor hadn’t read the program or saw the prohibition as not worth honoring. There were newspaper stories about it.  “I give Communion to everyone in my line,” my favorite priest told the reporters.

The history of who can and cannot get Communion is long and complicated. It has more to do with an institution asserting its power than with anything scripture says. The Gospels are full of Jesus demanding people turn away from sin, but not of him turning anyone away from his table. That’s the thing about practice: Scripture does not change, even though interpretation can. But practice varies across time and place.

Recently former Vice President Joseph Biden was denied Communion at a South Carolina church because he supports legal and federally funded abortion. He’s not the first politician to be denied Communion because of his position on abortion. As a U.S. senator, John Kerry was also denied.

On the other hand, Pope John Paul II, who made anti-abortion activities central to Catholic social action, gave communion to Tony Blair, who at the time was both a supporter of legal abortion and an Anglican. Blair later converted to Catholicism. I know plenty of Catholics who have violated the church’s policies on divorce and remarriage yet regularly receive Communion, either because their priest doesn’t know their situation or knows and doesn’t think it should be a barrier. After all, there are no forms to fill out before Communion. No one asks you to prove that you are worthy of receiving the body and blood of Christ. Such an inquiry would be ridiculous, because no one is worthy.

For the record, I’m not defending Biden’s right to receive because I agree with him. I believe life begins at conception, which has been enough for some progressive acquaintances to excommunicate me. What I don’t believe in is exclusion, as it is a direct violation of everything Christ came to establish. It’s not just that I believe Joe Biden needs the sacrament.  It’s that I need to be part of a human community that includes Joe Biden, a man whose career has been spent promoting vile policies, particularly around mass incarceration. I need to share a common humanity with Donald Trump too, and indeed pray for him every day. I ask that God take away his heart of stone and give him a heart of flesh, of course making the same prayer for myself. In scripture, Jesus makes it clear that my trespasses will be forgiven only as much as I forgive the trespasses of others. Exclusion is the opposite of forgiveness. I believe that my own sacramental experience includes the echoes of those amens from everyone else in the Communion line. The recognition that our spirits exist on the same food gives me great hope.

That brings me the second question that Kurtz’s essay poses: What aspect of socialism are you linking to religion: the goal or the movement? He writes, “How much tolerance can one have for the slow work of organizing and the compromises of coalition-building if one is sure that one’s efforts, if unobstructed, will build the New Jerusalem?”

That’s a challenging question for me, a person with no love for incremental change. Today, as people are choosing their 2020 sides, I am frequently exasperated with friends who support corporate Democrats. I should know better, though, than to excommunicate anyone politically. I’ve worked for years in juvenile justice reform and found that the best way to get legislation passed is to build a coalition of progressives who are appalled at the idea of children being in prisons and of Republicans who recognize the practice as expensive and counterproductive. Incidentally, I have often found those Republicans to be appalled at the injustice of these situations as well.

Does that mean that we compromise on our principles? Never. But it does mean that we look for ways to move forward by reaching out to people with whom we might disagree on nearly everything else. To do this we need the special grace of seeing our political opponents as multi-dimensional human beings.

By the time I, his youngest child, was born, life had wrung out my father quite thoroughly. In retrospect, I recognize that he was directing his disdain outward, though it was really meant for himself. I thought of him a couple of weeks ago when I was interviewing a man in deep poverty who was wearing a “God Bless America” tee shirt. He was angry because he was convinced that “we” provide housing, healthcare and apparently a panoply of benefits to “the illegals.” He had bought into the politics of division and scapegoating.

Those politics, to my everlasting sorrow, are mainly promoted in the United States by people who call themselves Christian. From putting asylum seekers in squalid prisons to cutting the Supplemental Nutrition Assistance Program, it all flies in the face of the Gospels. But perhaps the problem is equally linked to an abandonment of practice. In churches where the current horrible administration is praised from the pulpit, there are also greeters who stand at the door to receive newcomers. The practice is a recognition that all worship is a gathering in, never a setting apart.

The world will be transformed when a critical mass of people come to see the whole planet as a sacred space where the response to another human being is forever, “Welcome.”

Colleen Shaddox is a writer and advocate based in Connecticut.